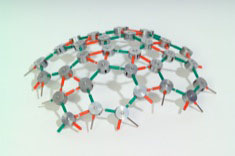 The model illustrates the two main principles of the structure:Each unit represents a protein molecule and the red and green spokes represent the bonds or contacts between neighbouring molecules.

The model has icosahedral symmetry being composed of hexagons and pentagons like a modern football. There are 12 pentagons (an essential part of the design) and there are 20 hexagons in this case.

The largest number of units that can be assembled into a mathematically perfect shell, where all the units are equivalent, that is both identical and identically connected to their neighbours, is 60. In the above model, the 180 units are said to be quasi-equivalent because they allow small variations in their bond distances and bond angles, allowing the formation of a multiple of 60 units, (reference DLD Caspar and A Klug, Cold Spring Harbour Symposium 27, 1-24, 1962). The particular design of the model is T=3 in the Caspar and Klug classification.