The LMB archives hold a small selection of scientific models, the majority of which have been made for or by the LMB.  Many of these date back to the early days of the Unit’s protein and DNA research.  If you are interested in the LMB’s scientific models and would like to know more, please contact the archivist. 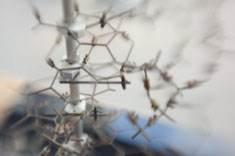 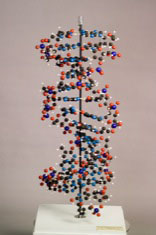 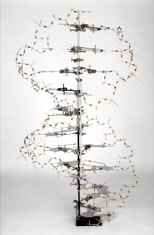 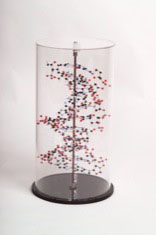 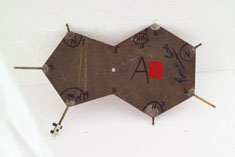 Base plate from the Watson and Crick 1953 model
Signed by Francis Crick and Jim Watson.
Donated to LMB by Arthur Arnone (LMB Alumnus)
‘You will notice it is an adenine that is missing its C6-amino nitrogen bond. This is how I found it 31 years ago on a dusty bench [in] the model-building room across from Max’s office. There were about 6 bases there at the time. I had just picked up the adenine when Francis Crick walked by the door on his way down the hall. I rushed over and asked him if this was one of the original bases. He said that he thought it was, and I was bold enough to ask if he would autograph it. A year later I was able to get Jim Watson’s signature when he stopped by the LMB on a visit.’ Arthur Arnone, 28 October 2003. 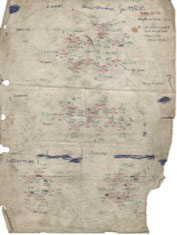 9 A4 drawings for making atomic models, including proteins and DNA bases, from LMB to Cambridge Repetition Engineers [late 1950’s/early 1960’s]. 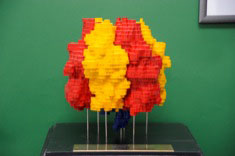 ‘Model of the structure of the enzyme, F1-ATPase, which was solved in 1994 by John Walker, joint Nobel prize winner for chemistry 1997, and his colleagues Andrew Leslie, Jan-Pieter Abrahams and Renee Lutter – see Nature370, 621-628 (1994).  F1-ATPase is the catalytic component of ATP synthase, the enzyme responsible for the synthesis of ATP in living cells.  The gamma subunit (blue) is believed to rotate within the three alpha (red) and three beta (yellow) subunits during catalysis’.The model was constructed by Chris Hellon, Andrew Leslie and Mick Fordham in the MRC LMB workshops.
On display, outside Max Perutz Lecture Theatre 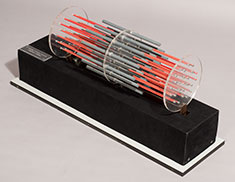 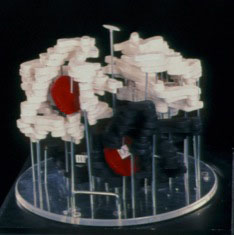 Early [balsa wood] model of haemoglobin
Max Perutz, 1959.
‘Model of haemoglobin, the protein of the red blood cells.  Built by Max Perutz in September 1959 at the Cavendish Laboratory in Cambridge.  The segments represent peaks of high density in a three-dimensional map obtained by x-ray crystallography.  They outline the course of the four polypeptide chains, while the red disks represent the four haems.  This and John Kendrew’s related model of myoglobin were the first protein structures ever solved’.
On display, outside Max Perutz Lecture Theatre 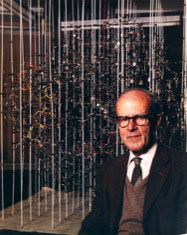 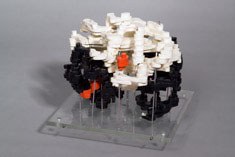 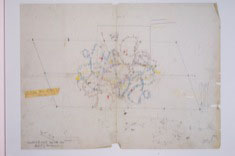 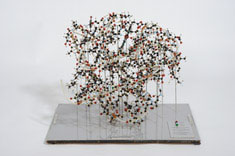 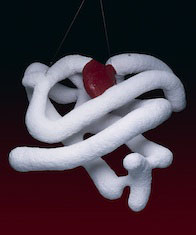 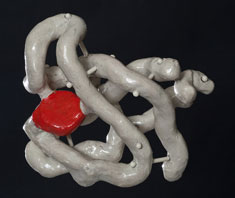 John Kendrew’s small sausage model of myoglobin, collected from his study at his home in Linton shortly after he died in 1997, with permission of his executor.
Donated to LMB Archives by Michael Fuller, 2005. 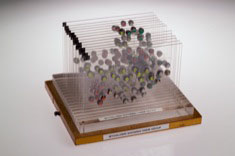 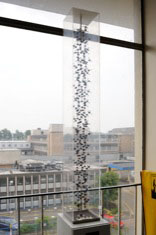 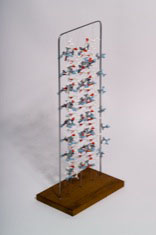 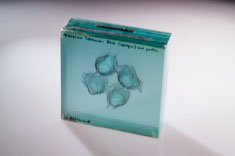 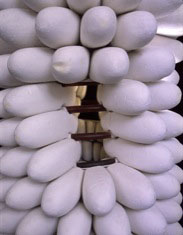 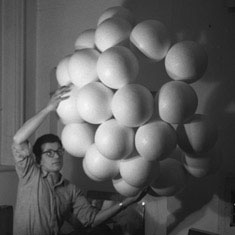 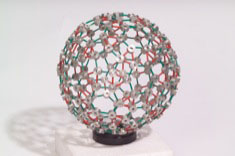 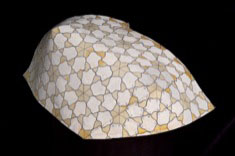 Two-dimensional paper lattice showing the idea of equivalence in the regular structure of the protein part of virus particles.
Aaron Klug 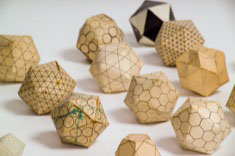 Collection of geometric models exploring possible virus structure, made from paper, plastics and assorted materials.
Aaron Klug and John Finch
“Model to illustrate a portion of the close-packed array formed by helically grooved rods when fully interlocked. It is suggested that in dry tobacco mosaic virus (TMV) the particles pack in this way.” Biochimica et Biophysica Acta19: 403, 1956.
Rosalind Franklin and Aaron Klug
Donated to LMB Archives by Aaron Klug 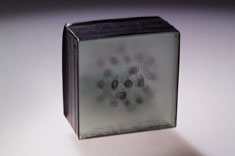