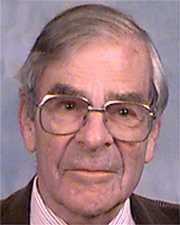 His many friends and colleagues around the world will be very sad to learn that Uli died on 24th March, aged 81, from cancer which developed during the last few months.

Uli was recruited by Max Perutz from the Royal Institution and joined LMB when it opened in 1962, in order to bring expertise in instrumentation development, particularly for X-ray crystallography. This was at a stage when far less equipment was available commercially and scientific advances depended almost entirely on developments within the Lab. In this Uli was very successful, pioneering a series of X-ray diffractometers, the Arndt-Wonacott rotation camera, film scanners, the “FAST” X-ray detector and most recently a miniature microfocus X-ray source. He also co-authored two influential monographs on Single Crystal Diffractometry and on The Rotation Method in Crystallography, and recently completed his autobiography. Uli was elected a Fellow of the Royal Society in 1982. He won the BCA Dorothy Hodgkin prize and gave the accompanying lecture in 2000 on “Crystallographic Apparatus: Past, Present & Future”.

Uli had wide interests, including sketching and hiking, and had an encyclopaedic knowledge of history, freely shared over coffee or lunch in the Canteen. He was an accomplished raconteur, and a sympathetic and helpful listener.

We shall all miss his entertaining company and stimulating conversation.