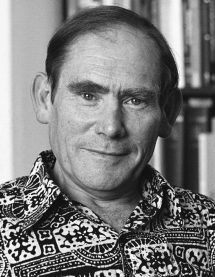 Sydney Brenner joined the MRC Unit for Research on the Molecular Structure of Biological Systems (now the LMB), in 1956, after medical studies at the University of Witwatersrand, South Africa and a PhD at Oxford University. Sydney joined Francis Crick in the LMB’s Molecular Genetics Division (now the Cell Biology Division) and for 20 years they shared an office and ideas.

Sydney’s early work concentrated on the structure of bacteriophage and he showed that the particles were built of component parts. This work also resulted in the introduction, by Sydney and R W Horne, of negative staining as a method for high-resolution electron microscopy of biological objects. He also worked on acridine dye induced mutations, introducing the idea of frame shift mutations, and this provided the genetic evidence for the triplet code. Collaborating with Francois Jacob and Matthew Meselson, in 1961 he provided the experimental evidence for messenger RNA. Work on chain termination mutations provided proof of the colinearity of the gene with the polypeptide chain, which led to the definition and identification of the three chain terminating triplets, stop codons, and the demonstration that the suppression was due to mutations in transfer RNAs. With Francois Jacob he introduced the replicon model which provided the basis for understanding the replication of chromosomes and episomes in bacteria.

In 1962, Sydney initiated a research programme aimed at understanding the genetic basis of biological complexity. For the experimental work he chose the nematode worm, Caenorhabditis elegans, carrying out extensive research on the genetics, anatomy, development and molecular biology of this organism, which led to many scientific breakthroughs. He worked out the methods of genetic analysis and in 1974 published an account of this research, which included the identification and mapping of about one hundred genes. He also began research on the complete three-dimensional reconstruction of the cellular anatomy of C. elegans from serial section electronmicrographs. In 1975, the first paper on the sensory nervous system of C. elegans was published. Sydney also recognised the need to establish a molecular genetic approach to problems of development and cellular function in C. elegans, and the project attracted a large number of talented young scientists to the LMB. Sydney’s work on C. elegans was awarded the 2002 Nobel Prize for Physiology and Medicine, which he shared with John Sulston and Bob Horvitz, for their discoveries concerning the genetic regulation of organ development and programmed cell death in C. elegans.

Sydney was joint Head of the Cell Biology Division, with Francis, from 1963 and Head from 1977-1979. He was the second Director of the LMB from 1979-1986. He left the LMB in 1986 and set up the MRC Unit of Molecular Genetics, in Cambridge, and in 1995 he founded The Molecular Sciences Institute at La Jolla and Berkeley and was appointed a Distinguished Professor in the Salk Institute, La Jolla, USA.