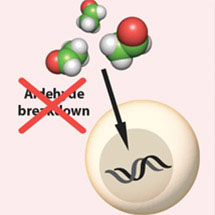 New research shows that acetaldehyde, the breakdown product generated when the body removes alcohol, causes irreversible damage to the DNA of stem cells in the body’s ‘blood cell factory’ – the bone marrow.

The research, published in Nature, was carried out by a team of scientists led by KJ Patel in the LMB’s PNAC Division. Using genetically modified mice the team was able to show how the damage caused by alcohol consumption is normally kept in check by two vital control mechanisms: an enzyme that mops up the toxic breakdown product (acetaldehyde) and a group of proteins that recognise and repair damaged DNA. Mice lacking both these protective mechanisms developed bone marrow failure, due to obliteration of their blood stem cells.

The findings are particularly significant for around a quarter of a billion people worldwide with the alcohol induced “Asian flush syndrome”; these individuals are deficient in the enzyme (ALDH2) that removes toxic acetaldehyde. This group may be unusually susceptible to DNA damage and alcohol consumption may result in permanent damage to their blood stem cells, increasing their risk of blood cancers, bone marrow failure and accelerated ageing.

It also provides the first explanation of why the bone marrow fails in patients with a rare genetic condition called Fanconi anaemia (FA). People with this disease inherit mutations in one or more of the FA genes that inactivate the DNA “repair kit” that would fix DNA damage caused by acetaldehyde, and as a result suffer from developmental defects, bone marrow failure and a high risk of blood and other cancers.
Commenting on the research, KJ Patel said: “Last year we published a paper showing that without this two-tier protection, alcohol breakdown products are extremely toxic to the blood. We now identify exactly where this DNA damage is occurring, which is important because it means that alcohol doesn’t just kill off healthy circulating cells, it gradually destroys the blood cell factory. Once these blood stem cells are damaged they may give rise to leukaemias and when they are gone, they cannot be replaced, resulting in bone marrow failure.” 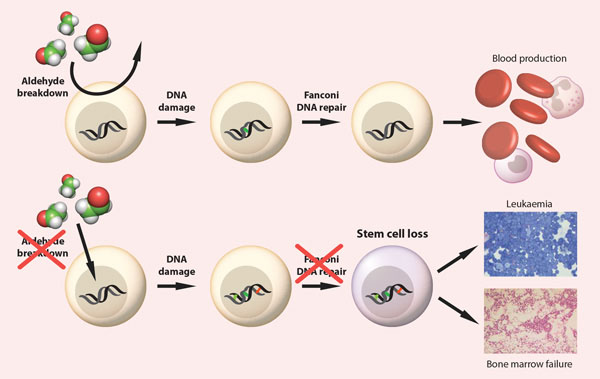 Hugh Pelham, Director of the LMB adds: “This study provides much sought-after explanation of the biology underpinning devastating childhood disease Fanconi anaemia. In future this work may underpin new treatments for this genetic disease, which currently is associated with a very poor prognosis. It also helps to inform large numbers of the global population, who are deficient in the ALDH2 enzyme, that drinking alcohol may be inflicting invisible damage on their DNA.”

This work was supported by the Medical Research Council, the March of Dimes Foundation and CRUK.