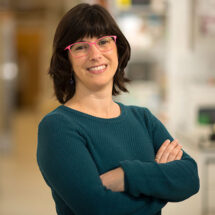 The Biochemical Society exists for the advancement of the molecular and cellular biology, both as an academic discipline and to promote its significance on areas of science including biotechnology, agriculture, and medicine. It is the largest UK discipline-based learned society in the biosciences with over 6500 members. The Early Career Research Awards recognise the impact of research carried out by young scientists across the Society’s different Theme Panels.

Ana joined the LMB as a postdoctoral researcher in 2014, to work in Lori Passmore’s group.  Lori’s group is researching how the proteins inside our body’s cells can come together to form complexes and exploring the roles that these complexes play in controlling the expression of genes. The group uses electron cryo-microscopy (cryo-EM), X-ray crystallography and other techniques to determine the structures of these multi-protein complexes and investigate their molecular mechanisms, activities and regulation.

Ana has been working on the determination of the structure and function of the cleavage and polyadenylation factor (CPF) from yeast. In eukaryotes, mRNA 3′-end processing is a key step in gene expression regulation that involves both cleavage and polyadenylation of the nascent RNA transcripts. CPF is the central complex of the 3’-end processing machinery. It processes the 3’ end of mRNAs and regulates transcription. mRNA polyadenylation is deregulated in human diseases (e.g. cancer, β-thalessemia) and is hijacked by viruses. Therefore it is critical to understand how CPF functions and how its activity can be regulated. Structural studies of CPF have been scarce to date, likely reﬂecting the large size of the overall assemblies and the complexity of interactions within the sub-complexes. The results of Ana’s research represent a breakthrough towards the understanding of 3’-end processing.  She played a key role in the determination of the first cryo-EM structure of the CPF poly(A) polymerase module, providing an understanding of its function in RNA processing. This work not only provides detailed insight into polyadenylation, but also has broad relevance in gene expression, RNA biology, and multi-protein assemblies. Ana was awarded an EMBO-Marie Sklodowska Curie long-term fellowship for this work.

Ana will receive her prize medal and present an award lecture at a Biochemical Society Conference.