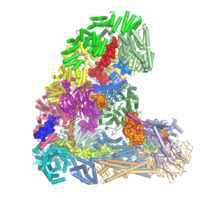 The anaphase-promoting complex (APC/C) is an unusually large multi-subunit complex that has a key role in cell division, controlling chromosome segregation and the cell cycle. Using electron cryo-microscopy (cryo-EM), David Barford and his group in the LMB’s Structural Studies Division have solved the first atomic structure of the APC/C, revealing its molecular architecture in unprecedented detail.

When cells divide they go through a series of phases known as the cell cycle. Each of these phases is carefully controlled by various checkpoint proteins, which check that the cell is ready for the next phase. Failure of a checkpoint can lead to stalled division, or uncontrolled growth and cancer. The APC/C is a key player in the cycle that responds to checkpoint signals. On activation it adds ubiquitin molecules to specific regulatory proteins at the right time, leading to their destruction and triggering the next phase of the cell cycle. APC/C regulation by checkpoints and other mechanisms either activates or inhibits the APC/C to ensure the correct order and timing of the cycle.

David’s group are trying to understand how the APC/C can assemble and function. They have previously solved the APC/C structure at lower resolution, but were missing structures of many of the 19 subunits in the complex, which limited their understanding of how the complex worked. In this study, Leifu Chang and Ziguo Zhang in David’s group made functional complexes of the APC/C with regulatory molecules and successfully carried out single particle electron cryo-microscopy on these complexes. They produced the first atomic resolution structure of the APC/C and showed its overall architecture, allowing the team to explain how the APC/C could be activated and inhibited. The cryo-EM structure also revealed insights into the mechanism for protein ubiquitination by the APC/C.

Knowing the structure of the APC/C complex at this high level of detail is a huge step towards fully understanding its mechanism of action and control by regulatory molecules. It is also important in the study of cancer, which is caused by uncontrolled cell division where the cells ignore checkpoint signals and continue to divide. The atomic structure could help lead to new cancer treatments by providing a framework for the rational development of anti-cancer drugs.

This work was funded by the MRC and Cancer Research UK.