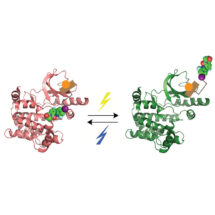 Small molecules are often used to regulate the functions of proteins and provide many drugs and tools for understanding biological pathways. However, selectively controlling a specific target protein within living cells is a major challenge. Jason Chin’s group from the LMB’s PNAC Division have created a new technique called BOLT that can selectively regulate specific proteins inside cells that could not previously be targeted.

Many proteins belong to families, where the related proteins are very similar in sequence and structure, but have different roles. Selectively targeting an individual protein with a drug can often be impossible because the place that the drug binds is similar in all the family members, so that many proteins are affected. Genetically engineering an entirely new site into the target protein could help solve this problem. Jason’s group has previously incorporated into proteins new ‘designer’ amino acids with bio-orthogonal groups that only react with particular molecules that contain specific chemical groups not normally found in cells.

In this study, Yu-Hsuan Tsai, Sebastian Essig and colleagues have developed bio-orthogonal ligand tethering (BOLT). They made molecules containing the specific chemical group required, and attached them via a linker to an inhibitor of the protein, which would switch the protein off. In the cell, the chemical group reacts with the designer amino acid in the target protein and tethers the inhibitor at exactly the right place to inhibit this protein (iBOLT). They have also shown that by using a photoswitchable linker, that changes shape with different wavelengths of light (photo-BOLT), they can make the inhibitor bind or unbind, and so use light to toggle the protein on and off.

MAP kinases are switched on or off in the MAP kinase signalling pathway that regulates growth and development. Problems in this pathway are found in 30% of human tumours, including melanoma and Hodgkin lymphoma. The key enzymes in this pathway, MEK1 and MEK2, are too similar for small molecule drugs to target either enzyme specifically. However, Jason’s group has successfully inhibited either MEK1 or MEK2 selectively in live mammalian cells with iBOLT. In collaboration with John James from the University of Cambridge, Yu-Hsuan Tsai went on to show that they could use this information to target a distantly related protein kinase (LCK) involved in immune cell signaling, demonstrating that BOLT can be extended to specifically regulate other family members. These results have immediate implications for studying kinase signaling, and in the future it is hoped that BOLT will make it possible to regulate many other proteins for which no selective small-molecule ligands exist.

This work was supported by the MRC, the European Research Council, European Molecular Biology Organisation, the DFG (German Research Foundation), the Wellcome Trust and the Royal Society.