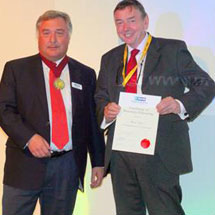 Dr Brad Amos, group leader in LMB’s Structural Studies Division, has been elected as an Honorary Fellow of the Royal Microscopical Society (RMS). The Society aims to advance science and support wider understanding of science and microscopy. Honorary Fellowship is the highest honour that the Society can bestow on an individual, and this award recognises the contributions made by Brad to light microscopy in general and his pioneering contribution to confocal microscopy in particular.

Brad joined the LMB in 1981 and it is in this laboratory that he helped to develop confocal microscopy into a practical instrument. He then went on to show its potential using fluorescent stained biological samples and has won numerous awards as a result such as the Royal Society’s Fellowship in 2007.

His current research focuses on designing a macro objective lens with an unusually high ratio of numerical aperture to magnification. The significance of this lens is that it will make it possible to form a highly detailed image of a large specimen such as a whole embryo or a lump of tissue removed for medical purposes. He is also developing confocal and multiphoton laser scanning microscopes incorporating the new lens. The applications of these will be chiefly in neurobiology and developmental biology.

Image courtesy RMS
Brad was presented with his Honorary Fellowship at Microscience 2010, the RMS Annual Meeting, which was held in the ExCel conference centre in London’s Docklands on 30 June 2010.