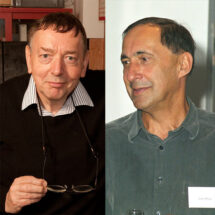 The 2015 Association of Biomolecular Resource Facilities (ABRF) Award for Annual Outstanding Contributions to Biomolecular Technologies has been awarded to Brad Amos and John White for the development of the laser-scanning confocal microscope.

Brad and John were members of the LMB when they developed and patented the first high-resolution, laser scanning confocal microscope for biological use in 1987. Their design and implementation was the first widely accessible system for the biomedical research community.

The laser-scanning confocal microscope was developed to improve the clarity and definition of images of cell structures. Traditional microscope methods produce a blurred image whenever cells are thick or embedded in solid tissue, or when they are stained with fluorescence. Looking to improve on the images they obtained in their research, Brad and John took a basic idea from the 1950s of a confocal microscope and applied novel optical designs to produce the laser-scanning confocal microscope. The key innovations in this microscope are the scanning of the light beam over a specimen, rather than vice-versa, and a high magnification at the level of the detector, allowing the use of a macroscopic iris. This produced sharper, clearer images across a specimen. A prototype was built in the LMB workshop, led by Michael Fordham, with novel software for control and basic image processing designed by fellow researcher, Richard Durbin. The design was then successfully commercialised and has been produced and developed since. It became the foundation for many subsequent commercial instruments, and has received many awards, including the Royal Society Mullard Award and The Queen’s Award for Technology.

The ABRF Award recognises pioneers in biomedical technologies for their achievement and contribution to the development of powerful new tools that served as the foundation of the modern biological research enterprise. Previous LMB winners include Fred Sanger, in 1994, for his pioneering nucleic acids sequencing technique. Brad and John have been invited to give a presentation at the annual ABRF meeting in St. Louis, March 30th-31st, 2015.