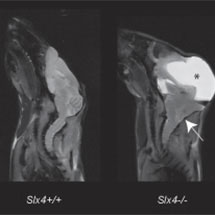 A group led by KJ Patel from the LMB, together with collaborators at the Wellcome Trust Sanger Institute and CRUK Cambridge Research Institute (CRI), have developed the first model for the human genetic illness Fanconi Anaemia (FA). This genetic condition results in abnormal development, bone marrow failure and a huge lifetime risk of developing cancer. At present the only long-term treatment for FA is bone marrow transplantation. The mouse model will allow scientists to study further the molecular basis of this disease at the whole organism level and allow them to work on novel therapies for FA.

Thirteen genes are known to be inactivated in FA and they all code for proteins that function collectively (the FA repair pathway) in our cells to repair damaged DNA. Scientists are interested in understanding what goes wrong in FA because the inactivated genes play a crucial role in preserving stem cells and enabling normal development of the foetus. To date how the FA repair pathway functions and why it should be so crucial for stem cell function, foetal development and cancer suppression has been elusive. KJ’s group have discovered a new gene in the mouse FA pathway known as SLX4. SLX4 is the first gene identified in the FA pathway which is clearly involved in DNA repair and links with enzymes that cut DNA. When this gene is inactivated in mice, the mutant animals display most of the features seen in the human FA illness and these mice therefore provide for the first time a disease model for this human condition. Two other papers are also published in the same volume of Nature Genetics which demonstrate that inactivation of SLX4 causes FA in humans.

This study was made possible by collaboration between Dr David Adams at the Wellcome Trust Sanger Institute (where the knockout animal was generated by the EUCOMM consortium) and Professor Kevin Brindle and his team at the CRUK CRI (who carried out state-of-the-art image analysis of mutant animals).
The research, which is published in Nature Genetics, was funded by the Medical Research Council, the Wellcome Trust, Cancer Research UK and the ATIP-Centre National de la Recherche Scientifique, Association pour la Recherche sur le Cancer and Fondation pour la Recherche Medicale grants.