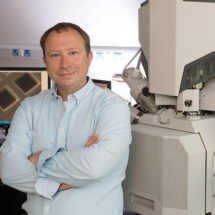 Chris Russo, Independent Investigator Scientist in the LMB’s Structural Studies Division, has been awarded the Microscopy Society of America Burton Medal for 2017. Established in 1975, the Burton Medal is awarded annually to a single individual under the age of forty who has made distinguished contributions to the field of microscopy and microanalysis.

Chris’ career in microscopy started with his PhD studies at Harvard University and the Massachusetts Institute of Technology (MIT), where he studied the imaging of DNA attached to carbon nanotubes.  Following this, he held a post-doctoral position in the Physics Department of Harvard, where he developed a new technique to create nanopores in graphene with atomic precision. This provided a platform on which biological samples could be imaged by electron microscopy. Chris then moved to LMB, joining Lori Passmore’s group, and together they worked on developing new methods for electron cryomicroscopy (cryo-EM), in particular focusing on how the specimen support could affect the resolution of cryo-EM images. This led to a number of advances including developing simple techniques to modify graphene for use as a specimen support for biological molecules and the development of a new specimen support structure. This structure, made entirely of gold, has reduced movement during imaging by fifty-fold. In 2016 Chris set up his own group at LMB, supported by an Early Career Fellowship from the Leverhulme Trust, to study the physical phenomena that limits resolution in cryo-EM, so as to enable the development of new devices, instruments and methods to improve the imaging power of the electron microscope in biology.

Chris Russo will receive the award at the Microscopy Society of America’s Awards Ceremony in Missouri in August 2017.