Home > Insight on Research > Common origins of RNA, proteins and lipids on earth 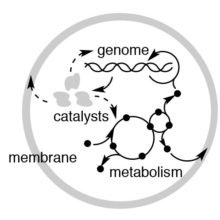 How did life first originate on this planet? Even the most minimal cell needs three subsystems: to convey information, to create compartments, and to catalyse metabolic reactions. But did these all arise together at the origin of life? Or did one form first? How could the molecules that create these subsystems assemble in the first place?

It was previously assumed that the molecules that created these three subsystems were too different to have originated together, and that one set had to come first. However, John Sutherland and his team in the LMB’s PNAC Division looked at the chemistry that would be needed to assemble the biomolecular building blocks in each subsystem, to see if they were compatible with each other.

On the early Earth, after a series of meteorite strikes, various chemicals such as hydrogen cyanide and hydrogen sulphide would have been present. Bhavesh Patel and Claudia Percivalle used conventional apparatus and reagents to simulate the sorts of chemistry that could have taken place on this early Earth. They took hydrogen cyanide through a series of chemical reactions, and showed that it was possible to assemble precursors of ribonucleotides, amino acids and even lipids from this simple chemical, with the addition of hydrogen sulphide, using ultraviolet light and copper ions as catalysts. These precursor molecules provide the biomolecular building blocks for coding information in a cell, for producing proteins, and for creating the membrane compartments necessary for forming the first cell.

The team created a protometabolic network of chemistry, which showed how the syntheses of these ribonucleotide, amino acid and lipid precursor molecules are interconnected. This exciting discovery showed that the three subsystems of the first cell could have originated simultaneously through common chemistry, and leads to the idea that life could have originated as a consequence of the fundamental reactivity of hydrogen cyanide and hydrogen sulphide.

The work was funded by the MRC, the Simons Foundation, and the Origin of Life Challenge.