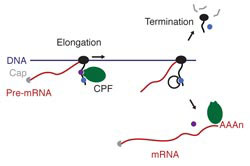 Work carried out by Lori Passmore’s group in the LMB’s Structural Studies Division, in collaboration with Patrick Cramer’s group in Munich, has revealed how transcription termination and mRNA processing by Cleavage and Polyadenylation Factor (CPF) are coupled via dephosphorylation of the C-terminal domain of RNA Polymerase II by CPF.

Genes code for proteins – the ‘doing-molecules’ in cells. In order to produce a protein from a gene encoded in DNA, the relevant part of DNA has to be copied into a messenger RNA molecule (mRNA), a process known as transcription. The mRNA provides instructions on how to build the correct protein from the amino acid protein building blocks. Transcription is carried out and tightly regulated by a number of large protein complexes, including RNA polymerases that create the mRNA copy of the gene, and factors that process the initial mRNA product (pre-mRNA) into a form that can be read by protein complexes that translate the code into a protein.

Phosphorylation is used in cells to regulate protein interactions that are needed for different processes to take place. Phosphorylation of the C-terminal domain of RNA Polymerase II (Pol II) acts as a code to recruit the mRNA processing factors, enabling mRNA processing to occur while transcription is taking place.

Lori’s group works on one of the mRNA processing factors – a large multi-protein complex called Cleavage and Polyadenylation Factor (CPF) that cleaves the pre-mRNA transcripts and adds a poly(A) tail, which is essential for translation of messenger RNA into the protein product.

Previously it was known that Tyrosine 1 (Tyr1) in the C-terminal domain of Pol II is dephosphorylated once it has transcribed the gene, a step thought to be key for the recruitment of transcription termination factors, but the enzyme that removes the phosphate was not known.

By combining the purified CPF and Pol II complexes, the collaboration showed that a subunit of CPF is responsible for the dephosphorylation of Tyr1 in the C-terminal domain of Pol II. Experiments led by Ashley Easter in Lori’s group and Amelie Schreieck in the Cramer group showed that the Glc7 subunit of CPF removed the Tyr1 phosphate in vitro, and when Glc7 was removed from the nucleus of live yeast cells both Tyr1 dephosphorylation and transcription termination were defective.

The discovery of the Tyr1 phosphatase activity in CPF identifies a link between transcription termination and mRNA processing. This research provides a greater understanding of the fundamental mechanisms of gene expression, adding a piece to the puzzle of how mRNAs are synthesized.