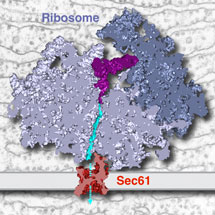 A collaborative team from LMB’s Cell Biology and Structural Studies Divisions has visualized the mammalian protein synthesis and export machinery at near-atomic resolution. The new research helps explain how secreted proteins, such as hormones, can cross an otherwise impermeable membrane to exit the cell.

It has long been appreciated that cells communicate with each other via proteins that are either secreted or embedded in the cell’s surface. How do these secretory and membrane proteins, which are synthesized inside the cell, get across or into a membrane? After all, biological membranes are typically impermeable to molecules far smaller than even the smallest proteins.

A universal solution to this problem, conserved from bacteria to humans, is to directly couple the protein synthesis machinery to a narrow gated channel in the membrane. In this way, a protein can be threaded through this channel as it is being synthesized. The protein synthesis is carried out by the ribosome, while the channel is formed by a protein called Sec61. Precisely how the ribosome couples to and regulates the Sec61 channel has been unclear.

To investigate this problem, Rebecca Voorhees and Manu Hegde in the Cell Biology Division teamed up with Israel Fernandez and Sjors Scheres in the Structural Studies Division to directly visualize the ribosome-Sec61 complex by cryo-electron microscopy. Rebecca and Manu isolated the complex from pancreas, a tissue specialized for secreting insulin and digestive enzymes. Rebecca analysed this native complex using the latest advances in single-particle cryo-EM, which were developed at LMB by the groups of Garib Murshudov, Richard Henderson, Venki Ramakrishnan and Sjors.

The team obtained snapshots of the complex in both an idle and active state, allowing them to glean how the channel changes during protein transport. Israel, in Venki’s group, used the dataset to also construct a near-complete atomic model for the mammalian ribosome. This is the first time atomic details have been seen for much of the mammalian ribosome, the Sec61 channel, and the nature of their tight coupling.

Since nearly all protein hormones and their receptors rely on the ribosome-Sec61 complex for their production, the new research may have implications for human health. Developing ways to selectively modulate the Sec61 channel could be used to control key hormones that regulate obesity, blood pressure, cholesterol and inflammation.

This work was funded by the Medical Research Council and a Henry Wellcome Postdoctoral Fellowship.