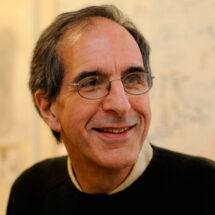 Emeritus group leader Cyrus Chothia, from the LMB’s Structural Studies Division, has been honoured with two awards for his ground-breaking work in the use of computational methods to study the structure and function of proteins, and the evolution of genomes, which led to the birth of Structural Bioinformatics and Computational Genomics.

Cyrus has been awarded the highly prestigious international Dan David Prize, which he shares with Michael Waterman (for biological sequence analysis) and David Haussler (for the human genome browser), for his pioneering work on understanding the relationship between protein sequence, structure and function. The Dan David Prize is awarded for outstanding scientific, cultural or social impact on our world, and this year recognises the importance of bioinformatics on our future.

The International Society for Computational Biology (ISCB), has also recently selected Cyrus as the winner of the 2015 Senior Scientist Accomplishment Award. This award recognises leaders in computational biology and bioinformatics for their significant contributions to these fields through research, education, and service.

During Cyrus’s long research career, he has helped lay the foundation for a comprehensive theory of protein structure, function and genome evolution and was one of the first investigators to study proteins and genome sequences using computers. He has collaborated with many scientists, both at the LMB and elsewhere, and with them developed a wide variety of principles and computational methods. These include developing a classification of protein structures, principles that underlie packing of protein secondary structures and showing that the sequence of immunoglobulin hypervariable regions can predict their conformation. With his co-workers, Cyrus helped create the SCOP database, a periodic table for all known protein structures, and the SUPERFAMILY database which identifies protein sequences that are related to those with known structures. Cyrus’s work has been instrumental in creating the field of Bioinformatics, which has had a huge impact on science.

Cyrus will be honoured at the Dan David Prize award ceremony at Tel Aviv University on 17th May and will give his ISCB Lecture in Dublin on Tuesday 14th July.