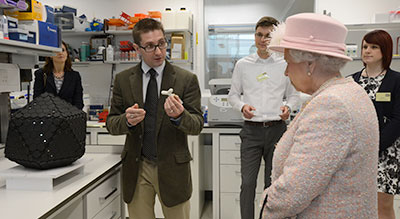 On 23 May, the new LMB building in Cambridge was officially opened by Her Majesty The Queen.  Accompanied by His Royal Highness The Duke of Edinburgh, they arrived on the guided bus and were greeted outside by local primary school children before being welcomed inside by staff and invited guests.

As the Royal party entered the spacious central atrium they got their first glimpse of the interior of the magnificent building, which was completed to budget and only a few weeks behind schedule.  Costing £212 million, the new building provides world-class research facilities and space for around 600 scientists, PhD students and support staff.  The new LMB building is the flagship for the extended Cambridge Biomedical Campus and the official opening is a highlight of the Medical Research Council’s Centenary celebrations, taking place throughout 2013.

Accompanied by the LMB Director, Hugh Pelham, The Queen viewed a display of items from the LMB Archive that showed a sample of the work that has led to nine Nobel prizes for research undertaken at the LMB.  This was followed by a presentation on how the LMB has exploited its discoveries – through patents, licensing and business start-ups – which has helped to advance medical research and improve the UK’s economic competitiveness.  The Queen spoke at length to LMB group leader, Chris Tate, and was fascinated by the potential for new drug delivery systems.

Meanwhile, The Duke of Edinburgh was shown a timeline of the lab’s successes.  This included a presentation about the pioneering research in the area of structural studies – the determination of the 3D structure of biologically important molecules, such as proteins.  He then met researchers working in the field of immunology, both from the LMB and the University of Cambridge. Menna Clatworthy, clinical scientist in the University said, “His Royal Highness was particularly interested in the body’s defence against infection, and why defence systems go wrong.”  The University has contributed £7.5 million to the building to enable them to house University groups alongside LMB teams, and to foster collaboration between researchers.

The Royal party then moved into one of the new lab areas.  Each of the main laboratories house 40 benchworkers.  Write-up desks are separated from benches by a clean corridor.  Equipment rooms are separated from the laboratories by a main corridor, ensuring accessibility to all and promoting interactions between scientists.  The Queen was shown examples of our work in key areas of medical research, with presentations on TRIM 21 and intracellular immunity – how viruses infect cells and how cells react to defend themselves – and on chromosome abnormality during meiosis, the leading genetic cause of miscarriage and congential birth defects.  LMB Group Leader, Melina Schuh commented, “I was very impressed by The Queen’s interest in the technology we use to study the development of eggs and she spent some considerable time looking down the microscope.”

His Royal Highness learnt about our research into neurodegenerative diseases, including Alzheimer’s and Parkinson’s diseases, and development of cryo-EM to study the 3D structures of molecules.

The party then moved back into the central atrium, where they met LMB students and postdocs, and scientific and non-scientific support staff.  Following a short speech by the Director, The Queen formally opened the building with the unveiling of a commemorative plaque.  After lunch, The Queen and the Duke of Edinburgh signed the visitors book and The Queen was presented with a posy of flowers by two young children of one of the LMB’s group leaders.  The Royal Party then left to open the new Rosie Hospital on the Addenbrooke’s site.

Hugh summed up the occasion “This event is a tribute to all those who have worked so hard to make the vision of this new building become a reality.”

You are invited to follow in The Queen’s footsteps and visit the new LMB building, when it opens to the public on 22 June, as part of the MRC Centenary celebrations.