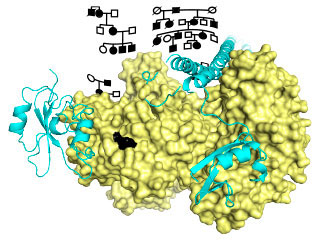 Work led by Sergey Nejentsev and Alison Condliffe from the University of Cambridge, in collaboration with Roger Williams’ group in the LMB’s PNAC Division, the Babraham Institute has discovered a rare genetic disease which predisposes patients to severe respiratory infections and lung damage. They have also identified how the genetic mutation affects the immune system and are hopeful that drugs that are currently undergoing clinical trials to treat leukaemia may also be effective in helping individuals with this debilitating disease.

The researchers first examined genetic information from individuals who suffer from immunodeficiency and are predisposed to infections. From this group, they identified a unique genetic mutation in 17 patients that suffer from severe respiratory infections and rapidly develop lung damage. The researchers found that the mutation increases activity of an enzyme called Phosphoinositide 3-Kinase δ (PI3Kδ). The enzyme is present in immune cells and regulates their function. However, constantly activated PI3Kδ impairs the work of these immune cells, preventing them from responding efficiently to infection. Consequently, patients with this mutation have severe and recurrent infections.

In the LMB, Oscar Vadas and others in Roger’s group cloned the PI3KCD mutant gene and expressed it in insect cells, which enabled them to obtain a large quantity of the pure protein encoded by the gene.  This protein works by modifying a component of the membrane surrounding a cell.  They measured its activity using synthetic membranes as targets for the protein.  The measurements showed better binding to membranes and an increased activity of the mutant relative to the normal protein.  By building a model of the structure of the mutant protein, they were able to rationalize this behaviour and relate it to previously seen activation of a related protein, PIK3CA, a common oncogene in human tumours.

The newly identified disease has been called Activated PI3K-δ Syndrome (APDS) after the enzyme that is affected by the genetic mutation. Although the prevalence of the disease is not yet known, it may be relatively frequent compared to other immunodeficiencies and may underpin immunodeficiencies and chronic lung disorders in a substantial fraction of patients. “It is very important that doctors consider a possibility of APDS in their patients,” said Dr Nejentsev, joint senior author. “A simple genetic test can tell if the patient has the mutation or not. We believe that now many more APDS patients will be identified all over the world.”

Roger’s group also showed that the mutant enzyme can be inhibited by a drug, Idelalisib, which is currently in clinical trials for treating leukaemia.  It may be possible to treat patients who have APDS, with related drugs which specifically inhibit the PI3Kδ enzyme. The study represents a first step to designing therapies for these patients tailored to their genetic makeup.

Alison Condliffe, joint senior author on the paper said: “Although as yet we have only identified a small number of patients with the E1021K mutation, they have suffered devastating (and in some cases life-threatening) infections from an early age, leading to permanent lung damage and severe disability. We expect to find many other patients as we extend our screening programme. For all of these patients, the use of PI3K delta inhibitors offers a potential and exciting new avenue of treatment aimed at normalising the function of immune cells and thereby prevent infections, rather than treating them as they occur. I find it tremendously exciting that we may be able to screen patients at an early age, and intervene before they develop irreversible lung disease. Furthermore, we hope to find abnormalities in this and related signaling pathways that may contribute to susceptibility to infection in the wider population.  As respiratory infections are the commonest diseases to affect mankind, this would clearly be of major clinical importance.”