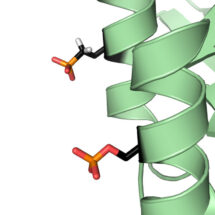 Protein phosphorylation is a key post-translational modification that is used to regulate many essential cell processes. A phosphate group is added to a specific site in a protein to switch that protein on or off, depending on its role. It has been challenging to understand the function of protein phosphorylation because it is difficult to make phosphorylated proteins. However, a new method developed by Jason Chin’s group in the LMB’s PNAC Division could revolutionise this research. This method produces proteins with specific phosphoserine residues encoded at the genetic level.

Serine residues are the most common sites for phosphorylation where the phosphate group is added by a specific kinase enzyme. To label the correct serine in the protein you need the right kinase, which is extremely difficult when the kinase responsible is unknown. To bypass this kinase system completely, Daniel Rogerson in Jason’s group used directed evolution to develop an aminoacyl-tRNA synthetase system that incorporated phosphoserine directly into the protein. Daniel also rewired the cell’s serine metabolism to incorporate a new version of phosphoserine that could not be hydrolysed (split), giving a permanently phosphorylated protein.

Working with collaborators Richard Bayliss from the University of Leicester and Miratul Muqit from the MRC Protein Phosphorylation and Ubiquitination Unit in Dundee, Jason’s group produced two specifically phosphorylated proteins: ubiquitin and the kinase enzyme Nek7. Milligrams of each protein were made, and verified by mass spectrometry that they were phosphorylated at the correct place. This proved that the system could work for different proteins, including kinases.

The ability to efficiently synthesise proteins with site-specific phosphorylation will allow scientists to study phosphorylated proteins and the signaling cascades involved in many cellular processes. The development of a non-hydrolysable phosphoserine will also make it possible to produce constitutively active versions of kinases and other proteins, enabling better understanding of how serine phosphorylation regulates protein function.