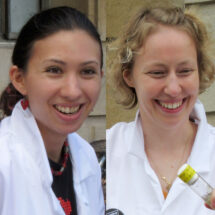 The LMB’s Danielle Mersch and Nicola Smyllie along with other leading female scientists from the region took to their soapboxes on Saturday 2nd July in Cambridge Market Square, to showcase their science to the public.

Danielle, from Greg Jefferis’ group in the LMB’s Neurobiology Division, wowed the audience with her talk on ‘Decoding the fly brain’. She explained how she uses flies to find out how neurons are connected, how they communicate and how information flows through a brain. By using very fine instruments and microscopy, you can ‘spy’ on neurons and see when they are silent or active. One of the key areas of research is finding out how sensory information is combined in the brain to decide behavior. Danielle explained how sensory stimuli activate flies to perform certain activities, for example smelling food gets flies excited and helps them find their food and decide what to eat. Danielle explained how in the lab you can magically make a fly believe that it smells an odour just by stimulating it with light.

Danielle: “It was thrilling to share science with the general public, kids and adults alike, on the market square. Kids become really excited, and adults reveal again their inquisitive nature. I really enjoyed it, and had lots of moments of fun and shared laughter.”

Nicola, from Michael Hastings’ group also in the LMB’s Neurobiology Division, entertained the crowd with her talk on ‘Body clocks: rhythm of life’. She told the audience that almost all life on Earth has a 24-hour (circadian) biological clock. For humans, while nearly every cell in the body contains their own clock, a central clock in the brain is a key component. Like an orchestra, there are many instruments which all have different timings, but they are synchronised and coordinated by a central conductor. She explained how it is important to train our body clocks and to keep to a routine in order for them to function effectively. This includes eating at regular times, and not too late at night, and waking up and sleeping to a set pattern. She highlighted that there is variation in people’s body clocks – you can be a ‘lark’ (a morning person) or an ‘owl’ (an evening person). One of the major reasons for studying body clocks is to explain the impact they have on health, for example shiftwork where our behaviour is at odds with our body clock. If our body clocks are not working it affects the cell cycle and other body processes. 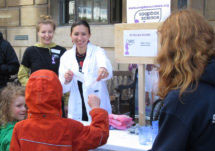 Nicola: “It was a fantastic afternoon. We were able to bring a wide range of science to a wide range of people. It was also great to get some interesting questions from the audience. I think the children particularly enjoyed my marshmallow model of the circadian clock!”

Soapbox Science aims to raise the profile and challenge the public’s view of women and science and address the issue of gender inequality in scientific careers. It provides a novel platform in a public area for scientific learning and debate. Started in 2011, the 2016 Cambridge event was the first in the region and there was strong competition to appear at the event. Danielle and Nicola were among the 12 scientists chosen to speak and interact with the public about their science.