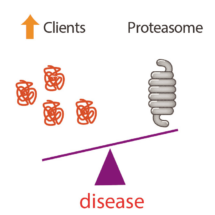 Cell survival depends on adaptive signalling pathways to ensure that the supply of vital components matches the fluctuating needs of the cell. The proteasome is essential for the selective degradation of most cellular proteins and thereby controls virtually all cellular processes. The current prevailing view is that protein degradation is largely regulated at the level of ubiquitination. However, proteasome abundance is also crucial for cell fitness and work by Anne Bertolotti’s group in the LMB’s Neurobiology Division has demonstrated that modulating proteasome abundance itself is an important component of the regulation of proteasomal degradation, and they have identified the signaling pathway controlling this.

Failure to degrade mutant or misfolded proteins, and their subsequent accumulation, causes diverse human diseases including devastating neurodegenerative diseases. The pathway identified here could be used as a unique switch to increase proteasome assembly and abundance on demand. This could be used as a generic strategy to reduce the burden of misfolded proteins that accumulate in such age-related diseases and therefore be of therapeutic benefit.

The work was funded by the MRC and an EMBO long-term fellowship.