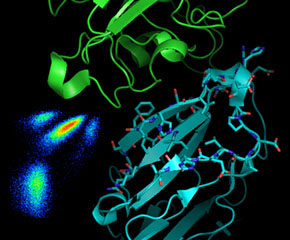 Research led by Professor Nick Brindle at the University of Leicester and Julian Sale from the LMB’s PNAC Division has resulted in the production of a molecule that has great therapeutic potential in the treatment of inflammatory conditions. Much of the work took place while Nick was on sabbatical at the LMB and involved additional input from Dr Hiroshi Arakawa in Italy and Dr Jean-Marie Buerstedde at Yale.

Angiopoietins play a critical role in the development and maintenance of blood vessels. There are two forms of Angiopoietin, Ang1 and Ang2, which both bind to the same receptor tyrosine kinase (Tie2) but exert quite different effects. Ang1 is continuously produced by the perivascular cells surrounding blood vessels and helps maintain the vasculature, while Ang2 plays an important role in blood vessel formation and remodelling during development and is normally not expressed in the adult. However, expression of Ang2 is re-induced in a number of disease states such as sepsis and cancer, and this results in blood vessels becoming unstable and leaky, which contributes significantly to the pathology of these conditions.

Previous work carried out in Michael Neuberger’s laboratory at the LMB identified human and avian B cell lines that continuously alter their antibody genes. This allows the mimicking of the natural process (affinity maturation) by which antibodies can be made more specific for a given target by repeated rounds of selection and further diversification. This basic technique, covered by an MRC patent which is currently licensed to the US company AnaptysBio, has been employed to generate a number of antibodies and has also been used to generate novel variants of green fluorescent protein.

The latest research aimed to see whether hypermutating B cells lines could be used to evolve a version of the receptor Tie2 that would specifically bind to the ‘bad’ Ang2, but not to the ‘good’ Ang1. The aim was to create a soluble form of the receptor that could be used as a ‘ligand trap’ to mop up Ang2 in disease states. The DNA for Tie2 was inserted into the antibody loci of the avian cell line so the cells ‘thought’ it was antibody DNA and mutated it. The mutations resulted in variants that are expressed on the cell surface and these were first selected for decreased Ang1 binding and then for high Ang2 binding, producing a molecule which is a very specific trap for Ang2. The mutations that were introduced lay at the predicted interface between Tie2 and the Angiopoetins, but were a completely unanticipated combination of a deletion and point mutation, neither of which on their own resulted in the properties of the final mutant molecule. Nick’s group have shown that the new ‘ligand trap’ is active in cell culture model systems and are currently testing it in a range of other models.

Ligand traps, such as this, have a number of potential advantages over antibody therapeutics. They have better tissue penetration and they generally don’t need protection from the immune system. The molecule identified in this work is a potentially important therapeutic which could lead to a new range of drugs with applications in inflammatory disorders. It is also the first exemplar of application of this cell line technology to a non-antibody target bound to a cell surface. These specifically evolved ‘designer proteins’ could also have a wide range of applications in the chemical, pharmaceutical, and agricultural industries. A patent for the original molecule was taken out by MRCT, and the collaboration between Nick in Leicester and Julian at LMB will now try and apply the technology to other targets.

The work was funded by the MRC, BBSRC and the Wellcome Trust.