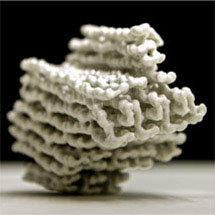 Many processes in biology rely on the relative position and orientation of interacting molecules. However, because of their small size and the constant thermal fluctuations that they experience in solution, molecules are very difficult to observe and control. In the field of nano-technology, researchers have developed a technique to construct nano-scaled 3D objects out of DNA. This technique, called 3D DNA origami, allows constructing objects with a precisely designed shape by folding together many DNA strands. Therefore, DNA origami has also been likened to playing with LEGO, albeit at a molecular scale. However, whereas LEGO blocks are very rigid, researchers thought that these new DNA structures would be jelly-like, flexible structures, thus limiting their use in technological applications.

Research in Sjors Scheres’s group in the LMB’s Structural Studies Division, and Hendrik Dietz’s group at the Technische Universität München, has shown for the first time that these 3D DNA origami objects are actually quite rigid. Using a powerful electron microscope, they present the first high-resolution 3D structure of a DNA origami object. Measuring twice the size of a prokaryotic ribosome, the object comprises over 460,000 atoms and its structure provides a library of previously undescribed DNA topologies. The order in this object has been estimated to be comparable to the order in natural protein complexes, thus opening up new avenues for scientific and technological exploration.

In particular, now that it has been shown that these objects are relatively rigid and that the resulting structures can be studied using electron microscopes, it is hoped that in the future similar methods can be used to position and orient reactive groups of molecules in scaffolds of DNA origami with enough precision to carry out complicated enzymatic or molecular recognition tasks, very much like the protein complexes in a living cell. This could then lead to a wide variety of nano-technological applications for DNA origami.
This work was supported by the Deutsche For-schungsgemeinschaft through the Excellence Cluster Center for Integrated Protein Science, Nano Initiative Munich, the Technische Universität München Institute for Advanced Study, European Research Council and the Medical Research Council, UK.