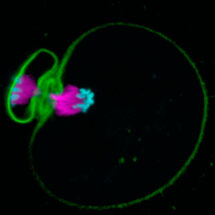 During fertilisation, an egg and a sperm fuse to form a new embryo. To create the egg, a precursor cell called an oocyte undergoes meiosis: a specialised form of cell division in which half the chromosomes are separated away leaving exactly the right number of chromosomes in the egg. Meiosis in human oocytes is highly error-prone, which can cause the egg to have the wrong number of chromosomes. This is known as aneuploidy and is the leading cause of pregnancy loss and genetic disorders such as Down’s syndrome. Despite the significance of this process, little is known about the genes involved. Melina Schuh’s group, in the LMB’s Cell Biology Division, has now developed screening techniques for meiotic genes, leading to the discovery of a number of genes that are essential for meiosis in mammals.

Finding the genes that are responsible for controlling accurate progression through meiosis is hugely important for understanding why human eggs so often contain errors. RNA interference (RNAi) is a method for systematically blocking the production of specific proteins, so that scientists can find out the role of each one. However, oocytes contain lots of stored proteins, so this interference would need to be started from a very early developmental stage to completely block each protein. Sybille Pfender, Vitaliy Kuznetsov and Michał Pasternak in Melina’s group developed a screen where they microinjected short interfering RNAs (siRNAs) into very small follicle-enclosed mouse oocytes and grew the follicles in vitro, blocking the protein expression while they grew. They waited until the oocytes had reached their full size before imaging them live with confocal microscopes to study the function of targeted genes.

This is the first RNAi screen for meiotic genes in mammals and its development has allowed Melina’s group to analyse the function of nearly 800 genes, identifying many new genes involved in mammalian meiosis. The screening also created huge amounts of data showing how mammalian chromosomal defects arise. Many couples find it difficult to conceive and rely on in vitro fertilisation to achieve their dreams of having a family. This screening technology will help to develop methods that could improve fertility treatments in the long term.

The research was funded by the MRC, the European Research Council and a MitoSys FP7 collaborative grant.