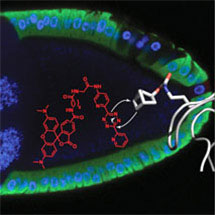 In the past few years, the ability to incorporate unnatural amino acids into proteins has begun to have a direct impact on the ability of scientists to study biological processes that are difficult or impossible to address by more classical methods.

New research, led by members of Jason Chin’s group in the LMB’s PNAC Division, has for the first time focused on expanding the genetic code of a complex multicellular organism, the fruit fly Drosophila melanogaster.

In this new study, published in Nature Chemical Biology, the team reports the making of transgenic flies that can use more than the 20 common natural amino acids and also use an unnatural 21st amino acid to synthesize proteins. Since the animals cannot make the unnatural amino acid themselves, the researchers mixed it into their food and then introduced a reporter gene containing the genetic codon they assigned to the new amino acid and showed, using several different methods, that the resulting protein indeed contained the new amino acid.

The scientists’ results show that they have developed a system that allows them to directly control the make-up of any chosen protein in a living animal and thus, elucidate the way the protein functions with unprecedented precision. As co-researcher Ambra Bianco explains: “These findings are significant in developing a toolset for basic research into an animal model”. In the future, it could be used to investigate biological processes to get a better understanding of the molecular nature of diseases and disorders.

This work was supported by the Medical Research Council, and the Louis-Jeantet Foundation Young Investigator Career Award.