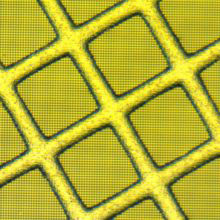 Recent exciting advances in electron cryo-microscopy (cryo-EM) have allowed scientists to find very detailed structures of some proteins. Still, determining the structure of many proteins remains too difficult for cryo-EM, as the images are too noisy to use for structure determination. Lori Passmore and Chris Russo from the LMB’s Structural Studies Division have designed new specimen support grids, made of pure gold, that improve the microscope image quality.

The structures of proteins are often studied by taking pictures of them with high-resolution electron microscopes. The proteins are frozen in ice on intricate support structures called grids, which hold the specimen steady in the microscope at extremely cold temperatures while the electrons pass through them. One major difficulty is that the electron beam causes the samples to move whilst the image is taken, which blurs the details in the images. The new generation of electron microscope cameras (developed in part at the LMB, by Richard Henderson and his colleagues) made it possible to film this movement of the specimen during imaging. These specimen movies allowed Chris and Lori to determine some of the physical origins of this movement and design a new type of grid to reduce it. The new grid, made entirely of gold, reduces specimen movement about fifty times relative to the standard carbon grid.

The gold grids improved cryo-EM image quality and allowed Chris and Lori to determine the structure of apoferritin. Ferritin is the protein complex that stores iron in almost all cells. Until now, its structure was too difficult to determine by cryo-EM because one needed to see the inner details of the protein to align the images with each other in 3D. Using this little grid of gold, they were able to nearly double the resolution of a multi-million pound electron microscope, and will be able to solve many protein structures that have previously been too difficult for electron microscopy or X-ray crystallography. These improvements will allow scientists to unravel the details of how the complex biological machines inside cells work.

This research was funded by the MRC and the European Research Council.