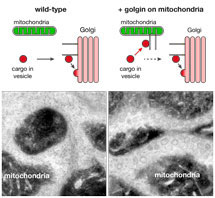 Inside our cells are many small transport vesicles that act as carriers to move proteins and lipids around the cell. To maintain cell function, these vesicles have to deliver their cargo to exactly the right destination. New research by Mie Wong from Sean Munro’s group in the LMB’s Cell Biology Division has shown that when specific vesicles arrive at their correct site, they are captured and tethered by long golgin proteins, ensuring that the cargo is delivered to the right place.

Cells contain small membrane-bound structures called organelles which carry out distinct functions in the cell. Cargo of particular proteins and lipids are delivered to these organelles by membrane vesicles, which bind and fuse with them. Like planes flying between airports, it is vital that the vesicles deliver their passengers to the right destination. Small SNARE proteins on the vesicle and organelle drive the two membranes to fuse, thus handing over the vesicle content. However, other proteins may act before this step to attach the vesicle to the organelle, and thus might be responsible for the choice of the right destination.

The Golgi apparatus is the central sorting station in the secretory pathway of the cell. It acts like a cellular post office, with vesicles arriving there from various places, before being repackaged and sent to different organelles. Tentacle-like golgin proteins are found in the Golgi apparatus, and Sean’s group wanted to find out if these long coiled-coil golgin proteins could act as specific vesicle ‘tethers’, catching the right vesicles and holding them in the correct place for subsequent fusion.

Mie used protein engineering to change the C-terminal targeting sequence of various golgin proteins, so that they would anchor themselves in mitochondrial membranes instead of on the Golgi apparatus. She then investigated how this change in location affected the distribution of different vesicles. Mitochondria do not usually receive transport vesicles, but Mie and Sean found that some of the relocated golgins caused specific transport vesicles to be captured by the mitochondria and accumulate there.

The relocated golgin proteins had redirected the cell’s cargo carriers to the wrong destination, thus showing that the golgins have a key role in controlling the traffic pathways within our cells. These findings reveal a fundamental biological process that allows the cells of our bodies to run many transport routes and yet remain organised rather than chaotic.