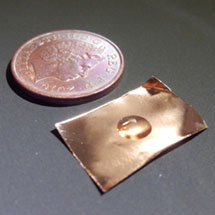 Lori Passmore and Chris Russo from the LMB’s Structural Studies Division have discovered how to modify the new material graphene using low-energy hydrogen plasmas, to allow it to bind proteins. This discovery makes it suitable for use in electron microscopy to solve protein structures.

Graphene, which was only discovered in 2004, is a two-dimensional carbon sheet that is one of the strongest and thinnest materials known. Stronger than steel, more conductive than copper and only one atom thick, it has the potential to change many fields, including electron microscopy. However, graphene (like Teflon) is hydrophobic, so proteins and other biological samples do not stick to it.

Electron cryo-microscopy (cryo-EM) is used to determine three-dimensional structures of proteins. Electron microscopes have improved enormously in the last few years. Combined with improvements in computer algorithms, this has made it possible to obtain high resolution 3D structures, but many challenges still remain. One of the main problems is with sample preparation: protein samples are embedded in a thin layer of ice on a support grid, but getting a uniform layer of protein molecules can be difficult, and charges can build-up causing the molecules to move. This can lead to blurry images, which give less detailed structural information.

Chris and Lori made large sheets of graphene using a new custom-made instrument, designed and built here at the LMB. They then invented a new way to change the properties of graphene using a hydrogen plasma so they could control how proteins stick to it. They tested how much plasma exposure was needed to change the way graphene interacted with a drop of water, and then tested the modified graphene as a support for electron microscope samples.

Their results show that the plasma-treated graphene is far superior to traditional sample supports, and makes the electron microscope images sharper and better, giving more detailed structural information. Lori and Chris, via MRC Technology, have now filed a patent application describing their method, and the hope is to licence it to relevant companies.  This work is one of the first applications of graphene to address problems in biology and opens up new techniques of using graphene to solve protein structures.