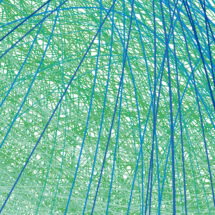 The structures of many proteins have been extensively studied, however it has proved extremely difficult to investigate the structures of the mRNA molecules that carry the genetic information for these proteins. Jernej Ule and his group, while working in the LMB’s Structural Studies Division, developed a groundbreaking new method for studying the secondary structure of mRNAs and using this were able to determine the basic structures of very long mRNA molecules in living cells for the first time.

Just like proteins, mRNA molecules can fold into complex structures that control their function. Small parts of the single RNA strand can form short duplexes (double-stranded helicies) with base-pair interactions similar to DNA, but very little is known about the structure of full-length mRNAs. Only part of an mRNA molecule contains the coding sequence for the protein. The rest of it (the untranslated region) is involved in regulation, and controls how much protein is produced from each mRNA. The structure of this untranslated region therefore directly affects protein production.

Yoichiro Sugimoto in Jernej’s group developed a method called hiCLIP to identify duplexes in cellular mRNAs by using a protein that binds to such duplexes. He then showed that distant parts of the long mRNA molecule could bind together to form duplexes and thereby identified previously unknown long-range RNA structures in mRNAs.

The group of co-senior author Nicholas Luscombe also found that these newly discovered mRNA structures had less genetic variation in humans than other areas of the mRNA. This indicates that mutations could cause disease by disrupting the structure of mRNAs.

Jernej is now based in the Department of Molecular Neuroscience at the UCL Institute of Neurology, where he is studying mRNA regulation during brain development or disease. Nick is also based at UCL in the Genetics Institute, and The Francis Crick Institute.