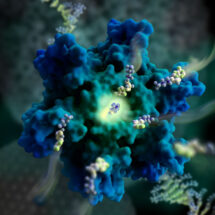 HIV is a retrovirus, meaning it has to copy its RNA genome into DNA in order to infect cells. While much has been learned about the virus, investigators don’t understand how it evades our immune system so successfully. A long-standing question has been how the HIV virus copies its genome using raw materials from the cell without being detected by immune sensors. Leo James’ group in the LMB’s PNAC Division have now discovered that HIV hides inside a protective protein shell called the capsid while it builds DNA, using specialised pores in the capsid to suck in the nucleotide fuel it needs.

The work, led by David Jacques during a long-term collaboration between Leo’s group and Greg Towers at University College London (UCL), used a multidisciplinary approach that involved determining the atomic structure of the capsid in different states and creating mutant versions of HIV viruses to see how this altered infection. This allowed the researchers to discover iris-like pores in the capsid that open and close like those in the eye. These pores suck in the nucleotides needed for replication at great speed while keeping out any unwanted molecules. Previously it was thought that the capsid came apart as soon as the virus entered a cell but this work demonstrates that the capsid actually protects the virus from the innate immune system whilst allowing the HIV genome to be replicated.

HIV remains a massive worldwide pandemic and whilst there have been significant advances in treatment there is still no vaccine or cure. This discovery presents the opportunity to re-evaluate existing treatments for HIV to improve their efficacy as well as a new drug target. Some of the most important anti HIV drugs, the reverse transcriptase inhibitors (RTIs), work by inhibiting the viral enzyme that copies the viral genome. It is now clear that these drugs must transit the pores to enter the capsid and hence block the viral enzyme. Understanding how RTIs transit the pores opens new possibilities for improving their delivery. The paper also demonstrates that a prototype inhibitor molecule, hexacarboxybenzene, can block the pores and prevent the HIV virus from copying itself, rendering it non-infectious. Compounds with similar properties, that could also cross the human cell membrane, would be an entirely new class of anti-viral drug for HIV and related viruses.