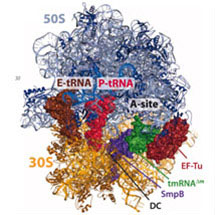 In this study, published recently in Science, Venki’s group elucidated the crystal structure of a tmRNA fragment, with SmpB and elongation factor Tu (EF-Tu) bound to the ribosome. The structure shows how SmpB plays the role of both the anticodon loop of tRNA and portions of mRNA to facilitate decoding in the absence of an mRNA codon in the A site of the ribosome. The structure also provides insight into why the tmRNA-SmpB system can only act on ribosomes stalled on truncated mRNA and, thus, would not interfere with normal translation.

Many antibiotics target ribosomes. Because the structure of ribosomes differs between humans and bacteria, and humans do not use tmRNA, these structures could help researchers develop new antibiotics to combat bacterial infection and related disease.

This work was supported by the Medical Research Council, the Wellcome Trust, the Agouron Institute, the Louis-Jeantet Foundation and the Boehringer Ingelheim Fonds.