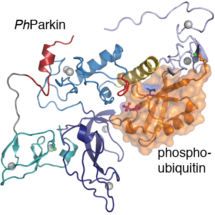 Early-onset Parkinson’s disease arises when the Parkin protein, an E3 ubiquitin ligase, cannot be activated and remains in a permanently ‘off’ state in neurons. Despite the importance of Parkin activation, until recently no-one has understood how the protein could be switched on. David Komander’s group, in the LMB’s Protein and Nucleic Acid Chemistry Division, has now revealed the structure of Parkin bound to an activator, phospho-ubiquitin. This new research explains how phospho-ubiquitin activates Parkin and offers hope for new methods of Parkinson’s disease treatment.

Parkin helps to clean up cells by disposing of broken mitochondria. Previous research, including work by Tobias Wauer in David Komander’s group, showed that molecules of phosphorylated ubiquitin, produced by the PINK1 kinase protein, can bind to Parkin and activate it.   In this latest research, Tobias discovered that he could use chemically engineered phosphorylated ubiquitin to covalently modify an insect version of Parkin, to create a complex of Parkin bound to phospho-ubiquitin. He determined the structure of this complex using x-ray crystallography and revealed the phospho-ubiquitin binding site that is conserved in human Parkin. Excitingly, David’s group found that the binding site comprises Parkin mutations found in patients with early-onset Parkinson’s disease. This would explain why those mutations prevent phospho-ubiquitin binding and prevent Parkin activation.

After Alzheimer’s disease, Parkinson’s disease is the second most common neurodegenerative disease in humans, and it has devastating effects on patients and their families. This research offers useful insight in understanding how Parkin is activated and could lead to drugs that benefit some patients with early-onset Parkinson’s disease.

This research was funded by the MRC, the European Research Council, the European Molecular Biology Organisation and the Lister Institute of Preventive Medicine.