Home > Insight on Research > How to get your (dynein) motor running 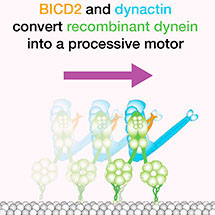 A cross divisional collaboration at the LMB between the groups of Simon Bullock, in Cell Biology, and Andrew Carter, in Structural Studies, has provided new insight into the activation of the large molecular motor dynein, a critical component of the transport system that operates within cells.

The cells within living organisms contain an elaborate transport system that moves different components to the right part of the cell at the right time. One key player in the system is the dynein motor, which can carry different cargoes to one end of a cell by ‘walking’ along tracks called microtubules. Defective dynein is connected to neurodegenerative disease, and a number of viruses including HIV, ebolavirus and poliovirus are known to hijack dynein in order to infect cells.

Dynein is a huge molecular machine made up of six pairs of proteins. Due to its size and complexity, dynein has been very difficult to produce synthetically in the laboratory. Most previous studies have used natural dynein purified from mammalian tissues, a method that makes it challenging to introduce changes into the motor complex that can shed light on its workings.

The work at the LMB, performed by Max Schlager, Thi Hoang and Linas Urnavicius, started with the modification of a virus that infects insect cells in a culture dish so that, once inside the cells, the virus synthesises the human dynein complex. Whilst such modified viruses are commonly used by scientists to generate proteins, the production of such a large protein complex is rare.

The virus was designed to introduce ‘tags’ on dynein that allow it to be extracted from the cells with high purity and labelled with a bright fluorescent dye. In subsequent microscopy experiments, the team used the dye to visualise the behaviour of the purified dynein on microtubules bound to a glass surface. They found that whilst dynein does not undergo transport along microtubules on its own, it moves over remarkably long distances when it interacts with a protein complex called dynactin and a small region of the protein BICD2. As it is known that BICD2 binds cargoes, the team’s finding suggests a strategy for making sure dynein only moves when it is bound to a consignment.

Finally, the scientists looked at the dynein-dynactin-BICD2 complex using electron microscopy and were able to show how different components interact, thus paving the way for future studies investigating precisely how dynein activity is controlled by dynactin and BICD2.