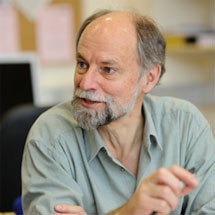 Hugh Pelham, Director of the LMB, has been honoured with a knighthood in the Queen’s birthday honours for 2011. The award is for services to science.

Hugh has pioneered research into how proteins help to protect the body against the effects of extreme heat at the cellular level. He has worked on how proteins find their right places within cells and how misshapen proteins are broken down to be recycled. How these processes work in a normal cell can give clues to what is happening at a cellular level in many human diseases. Hugh has been internationally recognized with numerous awards for his research and was made a Fellow of The Royal Society in 1988.

As Director of the LMB, Hugh is responsible for over 500 scientists and staff, and has played a major part in the creation of a new building for the MRC Laboratory of Molecular Biology. This building is due for completion towards the end of 2012. Providing first class facilities, it will be the flagship building for the extension of the Cambridge Biomedical Campus.