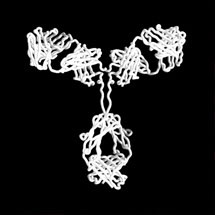 Lupus occurs when a person’s own B cells produce antibodies that become “autoantibodies” directed against “self” tissue instead of foreign pathogens. Benlysta (belimumab) works by recognizing and inhibiting the biological activity of B-lymphocyte stimulator (BLyS), a naturally occurring protein discovered by Human Genome Sciences that is required for B-lymphocyte cells to mature into antibody-producing plasma B cells. Elevated levels of B-lymphocyte stimulator have been associated with autoantibodies in lupus and certain other autoimmune diseases.

Development of Benlysta was made possible by the development of ‘combinatorial antibody libraries’, a technique developed independently at the LMB by Greg Winter’s group and by Richard Lerner’s group at the Scripps Research Institute. In this technique, large combinatorial libraries of human antibody genes are inserted into phages (viruses that attack bacteria) so that each phage displays on its surface a slightly different antibody. The phage libraries are then selected by their ability to bind to antigen, and the phages that bind are purified and the antibody genes built into complete human antibodies.

The LMB and Scripps teams pooled their inventions in Cambridge Antibody Technology (CAT, now MedImmune, part of AstraZeneca) to facilitate exploitation of the technology. CAT was responsible for the first stages of development of belimumab, which was developed further by Human Genome Sciences with GlaxoSmithKline to produce Benlysta

Benlysta was approved for use against lupus on 10 March 2011 by the U.S. Food and Drug Administration. It is the first new drug treatment for lupus in 50 years, and the second human therapeutic antibody, after Humira, developed from the ‘combinatorial antibody libraries’ technique.