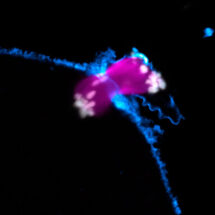 Miscarriages and genetic disorders, such as Down’s syndrome, are often caused by errors when an egg develops from its progenitor cell, the oocyte. Most defects occur during meiosis, a specialised form of cell division that leads to the formation of an egg. To ensure the egg cell has exactly the right number of chromosomes, an oocyte has to separate away and remove half of its chromosomes. Errors during chromosome separation can mean that after fertilisation the embryo will end up with the wrong number of chromosomes leading to pregnancy loss or genetic disorders. Meiosis in live human oocytes is virtually unstudied and it is unclear why chromosome separation errors are so frequent. Melina Schuh’s group in the LMB’s Cell Biology Division has carried out the first comprehensive analysis of meiosis in live human oocytes.

To study chromosome separation in human oocytes, Melina collaborated with Bourn Hall Clinic, a leading in vitro fertilisation (IVF) clinic, founded by the pioneers of IVF, Robert Edwards and Patrick Steptoe. Immature, unfertilised oocytes were donated by women receiving treatment there. Zuzana Holubcova, in Melina’s group, injected these oocytes with mRNA encoding fluorescent labels, which allowed her to view the chromosomes and the microtubule spindle, the machinery that separates the chromosomes. Zuzana imaged the oocytes with automated confocal microscopy over two days to analyse how they progressed through meiosis and to find out why human oocytes are so likely to have chromosome separation errors

Human oocytes lack centrosomes, which organise the spindle in other cell types. Melina’s group found that human oocytes use chromosomes to assemble their meiotic spindle. Spindle assembly took an unusually long time, and the spindles were very unstable and had abnormal attachments to the chromosomes. They found this error-prone spindle assembly caused significant problems with chromosome separation, leading to egg defects.

To improve fertility treatments it is essential to have a better understanding of meiosis and of the causes of chromosome segregation errors in human oocytes. This study reveals how fertilisable eggs are generated in humans and the imaging assays developed during this research will now allow studies of meiosis directly in live human oocytes. This will provide the foundation to develop improved fertility treatments.

This research was funded by the MRC, the Lister Institute and the European Research Council.