Home > Insight on Research > The idiosyncratic ribosomes of mitochondria 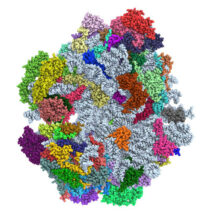 New research from Venki Ramakrishnan’s group in the LMB’s Structural Studies Division has revealed the complete structure of the mitoribosome from baker’s yeast (Saccharomyces cerevisiae). This is the first near atomic-resolution structure of a non-mammalian mitoribosome and expands upon an earlier study by the group into the large subunit of the yeast mitoribosome. Lead-author Nirupa Desai together with Alexey Amunts purified the mitoribosomes directly from yeast cells grown in the lab and visualised them using cryo-electron microscopy. Nirupa and Alan Brown then interpreted these images to build a model that revealed the atomic details of the 75 different RNA and protein components within the yeast mitoribosome.

This work was funded by the MRC, the Wellcome Trust, the Agouron Institute and the Louis-Jeantet Institute.