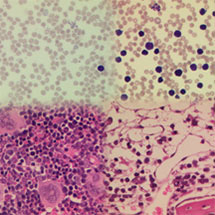 KJ Patel’s group in the LMB’s PNAC Division have uncovered for the first time, how excess alcohol can cause irreparable damage to our DNA. In a new study published in the journal Nature today, they also discovered a two-tier defence system in our cells that limits the threat of permanent genetic damage.

KJ’s group have discovered that an overload of a toxic chemical called acetaldehyde, a by-product from the breakdown of alcohol in our body, can cause damage to DNA. They showed that our cells have two natural ways of protecting us against acetaldehyde. Firstly, this toxin can be removed by specialised enzymes. If this step fails, acetaldehyde builds up and damages DNA, but a second mechanism kicks in to repair the damaged DNA, using another set of enzymes known as the Fanconi proteins.

In pregnant mice which were genetically altered not to have these two defences, the equivalent of a single binge drinking session of alcohol caused catastrophic damage to the foetus. Not only did alcohol damage the foetus, but in the adult modified mice, this alcohol consumption damaged blood stem cells, obliterating the production of blood.

KJ, lead author of the paper, said: “The findings show how critically reliant we are on both these control systems to prevent alcohol from causing irreversible mutations to DNA, both in the foetus and in our own cells. The effects of alcohol in the modified pregnant mice resembled foetal alcohol syndrome, where excessive drinking by pregnant women causes permanent damage to the unborn child, leading to birth defects and learning difficulties. Our work suggests that binge drinking could generate enough acetaldehyde to overwhelm the body’s two natural defence mechanisms. This new knowledge transforms our view of precisely how excess alcohol causes damage – ultimately changing our DNA. Quite apart from this, our conclusions suggest potentially simple approaches to treat Fanconi Anaemia – currently a terminal incurable illness in humans.”

The study highlights how two groups who have inherited failures of the natural control mechanisms are particularly at risk of severe DNA damage from alcohol. Individuals with a rare disease called Fanconi Anaemia, which affects around 20,000 people worldwide, do not have the enzymes which repair DNA and are likely to be very sensitive to acetaldehyde. This could explain why such people are highly susceptible to both blood disorders and cancer. More commonly, around 500 million people from South East Asia with a condition called the ‘Asian alcohol flushing mutation’ have a greatly reduced capacity to break down acetaldehyde. This research suggests that these individuals may be susceptible to lifelong DNA damage and could explain why alcohol consumption greatly increases their risk of gullet cancer.

Hugh Pelham, Director of the LMB, said: “We know that there’s a complex interplay between genetics, our body’s natural resilience to disease and our environment. By determining the molecular reason behind the toxic effects of alcohol to our DNA, our researchers have shown how vulnerable we can be to DNA damage from excess alcohol and even more so in the womb. Despite the existence of protective mechanisms, long-term genetic damage must be added to the risks of excessive alcohol consumption.”

The research was funded by the LMB, Children’s Leukaemia Trust UK and the Fanconi Anaemia Research Fund USA.