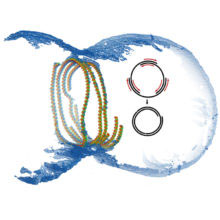 When a bacterial cell divides, the cell membrane and cell envelope have to pinch together in the middle of the cell to separate it into two daughter cells. A ring of proteins called the divisome constricts, cleaving the cell in two. The protein FtsZ is a crucial component of this ring and many FtsZ subunits join together in a chain forming long filaments. These FtsZ filaments are anchored to the membrane by another protein, FtsA, so that the membrane also constricts when the FtsZ ring closes. Scientists have long been puzzled by exactly how this works and Jan Löwe and his group in the LMB’s Structural Studies Division have now shown the 3D architecture of the FtsZ filaments forming this constricting ring, helping to understand the mechanism of action.

To determine the structure of the divisome, Piotr Szwedziak, Qing Wang and other members of Jan’s group used electron cryotomography to look at flash-frozen bacterial cells, and at purified FtsZ and FtsA proteins in lipid vesicles. The images revealed the arrangement of the FtsZ filaments in the ring and showed that the filaments need to slide past each other, like a tightening cork-screw, to close the ring. The images also showed that the FtsZ and FtsA subunits spontaneously organise themselves into filaments in lipid vesicles which then assemble a ring that pulls the membrane in.

There are more bacteria in our gut than there are cells in our body, and bacteria have a huge impact on the planet. Understanding how they divide is therefore extremely important. Scientists have been studying the role of the FtsZ ring in bacterial cell division for the last two decades but this is the first time that that anyone has shown how FtsZ filaments are arranged in cells in such detail, casting light on their mechanism. It is possible that blocking FtsZ or FtsA action in cell division might create new antibiotic targets.

This research was funded by the MRC and by the Wellcome Trust.