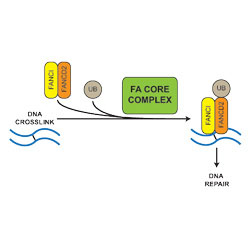 Research carried out by Eeson Rajendra from Lori Passmore’s group in the LMB’s Structural Studies Division, in close collaboration with KJ Patel from the LMB’s PNAC Division, has brought together LMB expertise in protein biochemistry and genetics to study the disease Fanconi Anaemia (FA). For the first time, they have isolated the intact FA core complex, and demonstrated which subunits are essential for monoubiquitination of FANCD2, which initiates the repair of damaged DNA in cells.

Fanconi Anaemia (FA) is an inherited disease in which damaged DNA is not repaired correctly, causing developmental defects, bone marrow failure and cancer. Patients with FA have mutations in genes for proteins in the FA core complex, which is a large complex of proteins that activates DNA repair in normal cells by adding a single ubiquitin molecule to another protein called FANCD2. This then recruits other DNA repair enzymes to the damaged DNA. Finding out how this ubiquitination works is critical to understanding what goes wrong in FA; however, the FA core complex has been very difficult to isolate and study.

Eeson developed a new method of purifying the complex from chicken cells by fusing a tag to one of the FA proteins and using this to ‘fish’ out the entire complex. The team studied how this purified complex added ubiquitin to FANCD2, and they also created some mutations within the complex (similar to what happens in FA patients) to see how this affected the FANCD2 reaction. It had been thought that mutations in any of the FA core complex genes would cause the complex to fall apart and prevent the repair of damaged DNA. However, this study found that only three of the nine subunits were essential for activity: when other proteins in the complex were mutated or removed, it could still add ubiquitin to FANCD2, to activate DNA repair.

The combination of genetic and biochemical methods has shed light on how the complex works in normal healthy cells to protect our DNA and how it goes wrong in patients with Fanconi Anaemia. Ultimately, these findings may have important implications for FA diagnosis and suggest potential therapeutic strategies that could be developed for patients with distinct mutations.

This work was supported by the Medical Research Council and the March of Dimes Foundation.