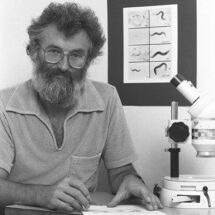 John Sulston, Nobel Laureate and pioneering scientist on the techniques for mapping of genomes, died on Tuesday 6th March, at the age of 75, after a short illness.  He was instrumental in determining the first genome of an animal, the nematode worm, C. elegans and went on to lead the UK team of the International Human Genome Project.  He was a much admired and influential researcher at the LMB and beyond.

John was born on 27th March 1942.  He took his degree in Natural Sciences at Pembroke College, Cambridge and then completed a PhD on the chemical synthesis of DNA at the University’s Chemistry Department.  He did postdoctoral research with Leslie Orgel at the Salk Institute, California before joining Sydney Brenner’s group at the LMB in 1969.

In Sydney’s group, John began his meticulous studies into the biology and genetics of the nematode worm. Sydney had proposed using the nematode as a research specimen: with its short lifespan, transparent body and just 959 cells in an adult worm, it was the ideal specimen. Building on Sydney’s earlier work, John developed a way of studying every single cell division in the nematode worm.  He spent long hours, painstakingly drawing out the dividing cells, and mapping out the sequence of cell changes and divisions in the developing nervous system of the worm.  He determined the complete cellular lineage of the worm, a task in which he was helped by Bob Horvitz, and discovered that this process was the same in every single worm.

One of his key discoveries, though, was that certain cells simply died at certain points during development, rather than keep on dividing forever.  He observed that this cell death appeared to be programmed.  By studying the cell at the point of ‘apoptosis’, or programmed cell death, John was able to map out exactly which genes were involved in this critical, but necessary process.  He found a vital gene, called nuc-1, which was essential for the whole process.  He also found a mutation of nuc-1, the first mutation of a gene in the cell death process of worms to be identified, in which the cell died but without the DNA within it being broken down, which is a key stage of the normal process.  This failure of the cells to die completely, at the correct point, is at the root of many cancers.  Similarly, faults in the process that causes too many cells to die, is responsible for the damage caused by strokes, heart attacks and Alzheimer’s disease.

Next John, with LMB colleague Alan Coulson, began to look at the physical mapping of the nematode genome.   In 1990, in collaboration with Bob Waterston, at Washington University, USA, they began work to determine the full DNA sequence of the nematode worm, undertaking the first ever major effort at genome sequencing.  Published in December 1998, this was the first complete genome of an animal.

In 1992, John’s work made him the ideal candidate to set up the Wellcome Trust Sanger Centre (later Institute), at Hinxton, Cambridge and he was its Director from 1992 to 2000.  Here, he led the UK component of the International Human Genome Project, which was tasked with mapping the complete sequence of the human genome.  He oversaw completion, in 2000, of the first ‘rough’ draft, about a third of which was sequenced at the Sanger.  It also pushed him into the spotlight as a passionate defender of publicly accessible science, when he fought against US biotechnology leaders who wanted to patent the genome for private enterprise.  Making this material publicly accessible was essential to the subsequent exploitation of this data worldwide. He told the story in his 2002 autobiography, co-written with science writer Georgina Ferry, ‘The Common Thread’.

John was awarded the Nobel Prize for Physiology or Medicine in 2002, jointly with Sydney Brenner and Bob Horvitz, for ‘their discoveries concerning the genetic regulation of organ development and programmed cell death in C.elegans’.  He was knighted in 2001 and in June 2017 was made a Companion of Honour.  He became a Fellow of the Royal Society in 1986, and won the Royal Society Darwin Medal in 1996, and was made a member of EMBO in 1989.

John continued his close association with friends and former colleagues at the LMB.  Hugh Pelham, LMB Director, commented ‘John was always a very modest man, but it is hard to imagine a more influential scientist of our time.  He will be sorely missed.’