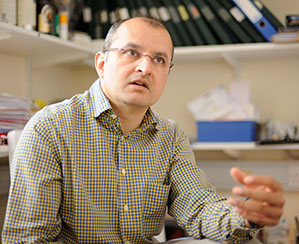 KJ Patel, group leader in the LMB’s Protein and Nucleic Acid Chemistry Division, has been elected into the Fellowship of the UK Academy of Medical Sciences.

The Academy promotes the translation of advances in medical science into benefits for patients and the population at large.  Academy Fellows are elected based on excellence in medical research, for innovative application of scientific knowledge or for their service to healthcare.

KJ’s work has shed new insight into how toxins released from metabolism damage the DNA of stem cells particularly in those that produce blood. Studies carried out by his laboratory have uncovered how the body protects against these toxic metabolites through a dual protection mechanism involving degradation of these metabolites and a specific form of DNA repair (the Fanconi anaemia DNA repair pathway). A coincidence of these discoveries has been to elucidate how the toxic by product of alcohol metabolism – a chemical called acetaldehyde, damages DNA and may contribute to diseases associated with ethanol abuse (the fetal alcohol syndrome and certain common cancers.)

KJ, who is medically qualified, has had a long career in the LMB having done his PhD with Michael Neuberger in 1989, a post doc here funded by the MRC Clinician scientist scheme from 1996 – 1998, a tenure track group leader from 1999 as an MRC Senior Clinical Fellow, and becoming a tenured group leader since 2007.

KJ becomes the 16th LMB scientist honoured by the UK Academy of Medical Sciences since 1998.