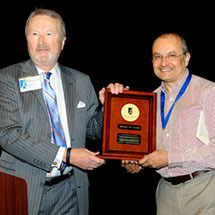 KJ Patel, from the LMB’s PNAC Division, has been awarded the Award of Merit for his ‘revolutionary work on aldehyde toxicity in Fanconi anemia hematopoietic cells’ by the Board of Directors of the Fanconi Anemia Research Fund.

Fanconi Anemia (FA) is a rare, cancer-predisposing disorder affecting about 150 or more families in the UK (the true extent is unknown). FA is present at birth, and causes progressive bone marrow failure. Children born with the condition often have symptoms such as problems with their lower arms or hands.

Acetaldehyde is the breakdown product generated when the body removes alcohol. Using animal models of the FA disease, KJ and his team showed how the body prevents acetaldehyde from causing irreversible damage to the DNA of stem cells in the body’s bone marrow by using two vital control mechanisms. Firstly, a special group of enzymes mop up the toxic breakdown product. If this fails and DNA damage occurs, another group of enzymes (the Fanconi proteins) repair the damaged DNA. Mice lacking both these protective mechanisms develop bone marrow failure, as their blood stem cells are obliterated.

The findings are significant for FA patients since they provide the first explanation of why their bone marrow fails. People with this disease inherit mutations in one or more of the Fanconi proteins, which leads to inactivation of the ‘repair kit’ that would fix DNA damage caused by acetaldehyde. As a result, FA patients suffer from developmental defects, bone marrow failure and an extremely high risk of blood and other cancers.

KJ, who is medically qualified, has had a long career in the LMB. He completed his PhD with Michael Neuberger in 1989, before becoming a post doc funded by the MRC Clinician scientist scheme from 1996 – 1998. He then took up a tenure track group leader position from 1999 as an MRC Senior Clinical Fellow, and has been a tenured group leader since 2007.

KJ received the Award of Merit in Houston, Texas during the gala dinner on Saturday 26 October. This award has been given only five times in the Fund’s 24-year history, and not since 2005.