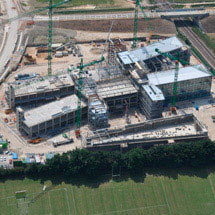 The new building for the LMB has reached the first major stage of completion, known as ‘topping out’, which describes the moment in a construction project where the final beam is placed at the highest point of the building.

The Rt Hon Andrew Lansley CBE MP, performed the ‘topping out’ ceremony today to commemorate this landmark moment in medical research. He said “Over the last fifty years we have seen MRC researchers make countless discoveries that have had a tangible benefit for the health of millions of people in the UK and worldwide, from the sequencing of DNA to the development of humanised monoclonal antibodies. I am thrilled both as Secretary of State for Health and constituency MP for South Cambridgeshire to see the new MRC Laboratory of Molecular Biology building emerge as a unique centre of innovation and a flagship for the newly-extended Cambridge Biomedical Campus.”

The Cambridge Biomedical Campus is a cluster of biomedical, clinical, research, treatment and teaching organisations including University of Cambridge, the Cambridge University Hospitals NHS Foundation Trust, Cancer Research UK and the Wellcome Trust, together with a proposed commercial medipark and the relocation of Papworth Hospital, which will provide an international centre of excellence in biomedical research and is key component of the strategic growth of the medical and biotechnology sectors in the Cambridge regional economy.
The event was also attended by the Universities and Science Minister the Rt Hon David Willetts MP who commented “This super-lab will be the global site for a new age of research collaborations aiming to alleviate human suffering. The MRC Laboratory of Molecular Biology has already made great strides towards this goal, ploughing back more than £300m of commercial income generated by its discoveries into the life-saving science of the future. This new facility will build on that success.”

Sir John Chisholm, Chairman of the Medical Research Council (MRC), said “The new building will help the MRC to augment the LMB’s globally competitive position as an innovative research centre that fosters translation and collaboration and is built on a strong foundation of ‘blue skies’ basic research, with far-reaching benefits. We are creating an environment that will allow innovative medical research to flourish, helping to ensure that the UK continues to attract and retain international leaders in research.”

Mr Graham Cash, Chief Executive of BAM Construction Ltd, said “It is very satisfying to reach this stage of such a complex and important project. One reason for that is the excellent team relationship that BAM and the MRC have formed. Expertise helps to create fantastic buildings; but the positive attitude of those involved is just as critical to success. On both counts, this project stands out and the new facilities being created promise fantastic benefits not just for Cambridge but the whole of the UK.”

Due to open in 2012, the building will provide first class facilities to some of the world’s leading scientists. The laboratory, designed by the architects RMJM and being built by BAM Construction Ltd, will cost around £200 million and provide space and facilities for more than 400 researchers.