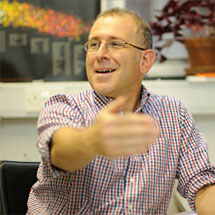 The HFSP is an international funding organization giving highly prestigious awards to scientists with the aim to promote interdisciplinary, basic research related to life sciences. The program grant is awarded for novel collaborations among teams of scientists working in different countries.

Leon shares the program grant with Rachel Wong of the University of Washington, USA and Frank Schmitz at the Saarland University, Germany. The award will fund their research on the structural and functional assembly of ribbon synapses in the retina.

Using the zebrafish as a model organism, Leon’s group have uncovered some of the design principles of the ribbon synapses that transmit visual signals, as well as the mechanisms by which calcium influx controls the fusion and retrieval of synaptic vesicles. The aim now is to investigate the same synapses as they process visual information in the whole retinal circuit.