Home > Insight on Research > Link Between Ribosome Maturation and Cancer 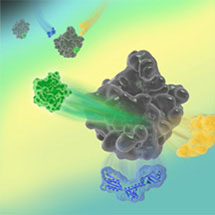 A group of collaborative researchers, led by Alan Warren’s group at the LMB, have discovered a surprising link between human ribosome maturation and cancer.

The team identified the conserved mechanism that underlies a critical step in the maturation of ribosomes and showed that this step is defective in an inherited form of bone marrow failure that is associated with significant leukemia predisposition (Shwachman-Diamond syndrome, SDS).

Shwachman-Diamond syndrome is an autosomal recessive disorder characterized by bone marrow dysfunction with a striking cumulative risk of progression to myelodysplastic syndrome (MDS) and acute myeloid leukemia (AML) that is caused by mutations in the essential, highly conserved SBDS gene. Although the myelodysplastic syndromes are some of the most widespread cancers of the blood, little is known about the genetic basis of these disorders and there are no curative treatments other than bone marrow transplantation, which is available to only a small proportion of patients.

By solving a high-resolution solution NMR structure of the human SBDS protein and by reconstituting a late step in ribosome maturation with normal and mutant versions of SBDS implicated in human disease, the researchers demonstrated how SBDS co-operates with the GTPase enzyme elongation factor-like 1 to drive ribosome maturation.

The findings are highly significant as they link defective ribosome assembly to bone marrow failure and leukaemia. They not only define the mechanism underlying a fundamental step in ribosome biogenesis, but also directly identify new approaches to treat the disease.

Alan Warren says: “We have defined SDS as a “ribosomopathy”, linking the pathogenesis of this disorder to other human bone marrow failure and cancer predisposition syndromes in which ribosome dysfunction has been implicated (e.g. 5q-syndrome and Diamond-Blackfan anaemia).” Future work will focus on designing targeted therapeutics based on this novel insight.

Collaborators with Alan’s group included researchers from Andrew McKenzie’s group at the LMB, Stefan Freund and the LMB NMR facility and researchers in Toronto and France.