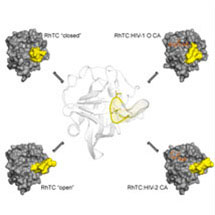 A group of collaborative researchers, led by Leo James’ group in the LMB’s PNAC Division, have discovered evidence that helps to explain why primates are more resistant to HIV than humans are.

Rhesus macaques are protected against HIV by a protein, Rhesus TRIMCyp (RhTC), which targets HIV inside cells thereby preventing infection. However, how RhTC targeted HIV viruses and why it remained effective, given the diversity of viral strains and their capacity for mutation, was unclear.

Using a combination of biophysical techniques, the team – led by Matthew Caines, and Katsiaryna Bichel – showed how RhTC has evolved a property of conformational diversity, which allows it to form multiple shapes, unlike many proteins that are confined to a single shape. This ability to form different shapes allows RhTC to target different viruses (including HIV-2, HIV-1 O group, SIVagm and FIV).

These findings are significant in showing how proteins can use diversity of shape to target fast changing pathogens such as viruses. They may also help to guide the design of protein therapeutics for gene therapy – currently being considered for HIV treatment – and to improve the understanding of other aspects of immunity.