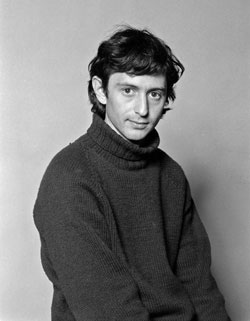 The LMB is delighted to congratulate Michael Levitt, Arieh Warshel and Martin Karplus on being awarded the 2013 Nobel Prize in Chemistry, for the development of multiscale models for complex chemical systems.

A key part of the Nobel Prize winning research was undertaken at the LMB, in the Structural Studies Division, in the 1970s by Michael Levitt in collaboration with Arieh Warshel.

Michael Levitt came to LMB as a PhD student in 1968, having first met Arieh Warshel while working as a visitor at the Weizmann Institute, Israel. At Weizmann Michael had become interested in protein conformation analysis and had written a general computer program for studying the conformations of small molecules. He realised that the same program could form the basis of a system for studying larger molecules. It was this system that Michael developed at LMB during his PhD work.

Martin Karplus, who had a research group in Harvard, was a visitor to LMB in 1969-1970. He and Arieh worked together at Harvard in the early 1970s; Arieh combined his work with Michael on the classical computer program with Martin’s work on quantum physics. In 1972 Martin and Arieh published a paper showing for the first time how to combine classical and quantum physics when modelling retinal.

After completing his PhD, Michael returned to Weizmann to work with Arieh, who had returned from Harvard. They aimed to create a computer program to simulate enzymatic reactions. To do this they had to make the classical and quantum physics collaboration work more smoothly in their computer program.

Michael returned to LMB in 1974 as a member of scientific staff, and was joined by Arieh who came to LMB as a visitor in 1974-1975. During this time at LMB the final obstacles were overcome and two important papers were published in 1975 and 1976. The 1976 paper was the first computerised model of an enzymatic reaction, and for the first time allowed any kind of chemical reaction to be simulated involving any kind of molecule, irrespective of size.

Together the work of all three alumni has been developed further and enables modern chemists to simulate complex chemical reactions on a computer. This ability has allowed for much deeper understanding of how chemical processes happen.

Richard Henderson, former LMB Director and former Head of LMB’s Structural Studies Division commented, ‘Their early work on energy minimisation and its evolution into molecular dynamics has developed into a world-wide industry. It has permeated into all aspects of structural biology, from protein folding to drug design, to supramolecular interactions. Hopefully, it will soon be possible to compute the structure of almost everything, even if not with perfect accuracy.’

This brings the total number of Nobel Prizes awarded for work undertaken at the LMB to 10.

Both Michael Levitt and Arieh Warshel have recently written chapters for the book ‘Memories and Consequences: Visiting Scientists at the MRC Laboratory of Molecular Biology, Cambridge’ Edited by Hugh Huxley and published by MRC Laboratory of Molecular Biology, Cambridge. Copies are available on request from the LMB Archive, or available to download here.