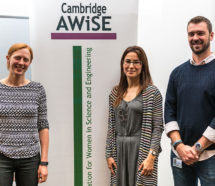 The LMB and CambridgeAWiSE recently held their 10th annual ‘What next for your career in science’ event at the LMB. Three speakers from diverse scientific industries discussed their respective professional experiences. The networking event welcomed early career researchers from all over Cambridge to hear about these different career opportunities. While all of the speakers hold PhDs in the life sciences, they have taken very different career paths and their talks focused on the key transition points that led them to their current positions. 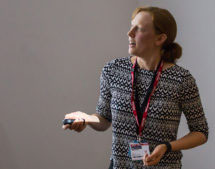 Hayley Sharpe, a Principal Investigator at the Cambridge Institute for Medical Research (CIMR), University of Cambridge, completed her PhD studies at the LMB in 2010 and in 2011 joined Genentech Inc., San Francisco, USA, as a postdoc. In 2016, she was awarded a Wellcome Trust/Royal Society Sir Henry Dale Fellowship and established her own research group. Hayley spoke about her decision to do a postdoc in industry in order to pursue a new scientific area and to keep her career options open. Initially, she found this transition challenging but gained confidence throughout. Her passion for basic science and its importance in drug discovery motivated her decision to pursue an independent position in academia. Hayley recommended seeking advice and information from as many sources as possible when making decisions as well as finding supportive people.

Burcu Babaoglan Fiehler, Clinical Trials Coordinator in Cambridge Clinical Trials Unit (CCTU), carried out her PhD studies at Washington University in St. Louis, USA, finishing in 2008. In 2009 she joined Sarah Bray’s lab in the Department of Physiology, Development and Neuroscience (PDN), University of Cambridge, as a postdoc to continue her work on Notch signalling. In 2013, she finished her postdoc and steered away from basic science towards clinical research to work on cancer trials at CCTU. She currently runs a multi-centre trial called SIEGE. In order to gain her position in clinical research, Burcu took advantage of a variety of online courses and work experience programmes. She encouraged young researchers to be persistent when applying for new positions and highlighted the advantages of meeting potential recruiters face-to-face Ryan Fiehler, Senior Scientist at F-star Biotechnology Ltd, completed his studies at Washington University in St. Louis, USA in 2007 and joined Fiona Watt’s lab at the CRUK Cambridge Institute in 2009 as a postdoc investigating skin homeostasis and cancer. This research was funded by a NIH Ruth L Kirchstein grant awarded in 2010. In 2013 Ryan joined F-star Biotechnology Ltd. Ryan initially applied for a position in Biotech after completing his PhD. Despite experiencing little success, he focused on getting a postdoc position in a field that would provide access to the biotechnology industry. Ryan spoke about the importance of networking to help identify new opportunities. He also recommended temporary industrial postdocs as a way of gaining experience and increasing the chance of being offered a permanent position.

Burcu and Ryan also spoke about their experiences balancing their work and family life. They have two children together and Burcu took 6 months maternity leave after the birth of each child. They underlined the importance of sharing family responsibilities and advocated the Shared Parental Leave entitlements. They both believe that a good balance between work and family life can be achieved by good organisation, minimising the daily commute, and a little help from baby sitters.

All speakers declared that maintaining a social life away from the lab is crucial to any fulfilling career in science and that this can be achieved by being more organised at work. Despite suffering initial setbacks, each speaker was able to identify potential weaknesses and overcome them to improve their chances of gaining that next step in their career.

After the talks, there was a lively panel discussion and the conversation continued during the networking session afterwards.