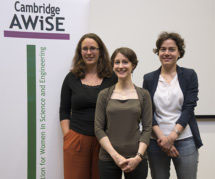 The LMB and CambridgeAWiSE recently held their 9th annual ‘What next in your career’ event at the LMB. Three recent LMB alumni returned to discuss their respective career experiences. The networking event welcomed nearly 70 early career researchers from all over Cambridge to hear about these different career opportunities. While all of the speakers held PhDs in the life sciences, they have taken very different career paths and their talks focused on the key transition points that led them to their current positions. 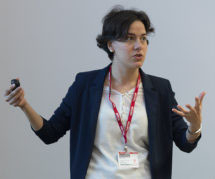 Milka Sarris, a Group Leader at the Department of Physiology, Development and Neuroscience, completed her PhD at the LMB in 2009. Afterwards, Milka moved to the Institut Pasteur, Paris and in 2014 was awarded a MRC Career Development Award to establish her own group. Focusing on her transition from postdoc to fellowship, Milka emphasised the importance of undertaking original research and identifying supervisors who, will not only encourage you, but also suit your style of work. She also highlighted the necessity of self-promotion, especially when working on novel research topics. Milka’s advice about being ambitious and pursuing what drives your curiosity is best captured by a favourite expression of her PhD supervisor, Dr Alex Betz: “If you walk on thin ice, you might as well dance.” 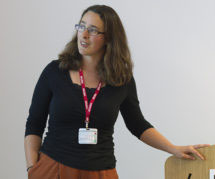 Katherine Brown, Executive Editor of Development, moved to EMBL-Heidelberg after her PhD at the LMB, before leaving the bench to take up a role as a scientific editor at the EMBO Journal in 2008. While doing her postdoc, Katherine realised that she preferred advising other researchers on their projects and wanted to widen her knowledge base. She emphasised the job satisfaction she experiences in scientific publishing, working in a fast-paced scientific sector that allows her to constantly interact with scientists and learn about the latest developments in biomedical research. Researchers interested in exploring editorial positions were encouraged to build a written portfolio by writing review papers and articles for blogs. Katherine also advocated gaining direct experience through freelance editing and internships. 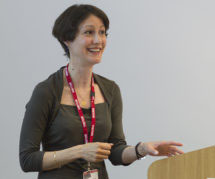 Elise Bernard, a peptide chemist at MedImmune, obtained her PhD from the Institut National Polytechnique de Lorraine in Nancy, France. After various postdoc positions she joined Greg Winter’s lab at the LMB where she worked developing new bicyclic peptides. This work was substantial to establishing the LMB spin-out company Bicycle Therapeutics. Elise spoke about the importance of remaining flexible, being able to share the vision of different labs and adapting to their research environment. She also highlighted how researchers can utilise their diverse knowledge to bridge the gap between two seemingly unrelated fields stating “Everything is useful to me, from disulphide bridge formation to enzymatic assays”.

Although the speakers have taken highly divergent career paths, their advice was complementary “Be ambitious, be persistent, pursue what you enjoy and work hard.”

After the talks, there was a lively panel discussion and the conversation continued during the networking session afterwards.